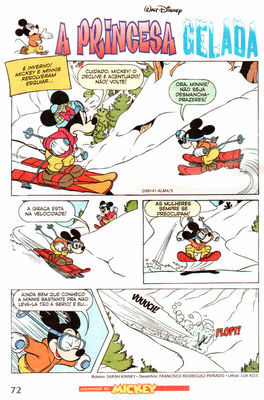 And this is just the beginning of a bad day...
Advertisement:

The Ice Princess is a Mickey Mouse Comic Universe story, made by Sarah Kinney (writer) and Francisco Rodriguez Peinado (artist) and published in 1999.

Mickey accidentally goes to a land where both buildings and residents are made of ice. An individual named Mrozek has a problem - he must make the princess fall in love with him, otherwise all the bachelors in the town will melt. Mickey decides to help him.

And then the beautiful and cruel princess falls in love with Mickey.

Tropes used in The Ice Princess: