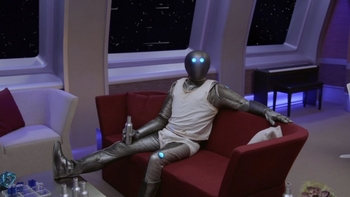 It is really hard to choose between this, a human Isaac, or Bortus with a mustache for the most fantastic image from this episode.
Doctor Finn begins developing feelings for Isaac, but finds dating an emotionless robot is a bit of a chore.