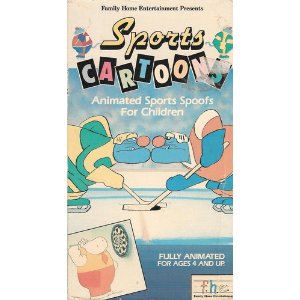 Sports Cartoons was a Canadian Animated Series produced by Derek Lamb and Janet Perlman's Lamb-Perlman Productions in 1985. The series featured various sports being played by anthropomorphic animals. Professional sports such as ice hockey, football, soccer, curling, clay target shooting, and boxing were depicted. Some segments involved games like table tennis, darts, and chess. A few even featured Olympic events such as gymnastics and the shotput.

Four basic characters were used throughout the shorts: a hippo, a cat, a pig, and a dog. The hippo was usually the protagonist who was quite gentle and friendly, the cat was always the antagonist, the pig was another protagonist who usually triumphed through dumb luck, and the dog was usually a referee or judge - though on some occasions he would be a player in the sports and games.

Roughly 45 cartoons were made, ranging from 40 seconds to around 2 minutes, and would frequently run as filler segments on Nickelodeon during the late 1980s through the mid-1990s (with the "Darts" cartoon airing until around 2000).