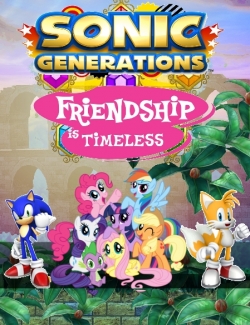 It can be found on Fimfiction.Net here.

The events of the intro cutscene of Sonic Generations still occur like in the original: Sonic's friends set up a surprise birthday party for him, Sonic shows up to it, and then the Time Eater shows up shortly afterwards, sending Sonic's friends to different parts of Sonic's history.

However, before that happened, the Mane 6 and some of their friends were having a picnic in Ponyville when the Time Eater also shows up and sends the ponies to different parts of Sonic's history.

Now the ponies must join these strange new creatures from another world and destroy this eminent threat that is threatening both of their worlds. Truths will be revealed, lies will be ripped out, and two worlds' fates and a friendship will hang in the balance.

Like in Sonic Generations, the story is divided into three parts:

Some time later, a Spin-Off story has been released, entitled Adventures on the Friendship Express, explaining exactly what happened during chapters 15 and 16 of the original story. It can be found Fimfiction.Net here

. Stages used so far include:

and Sonic Forces: Into the Mania

. The former is a sequel to Sonic Boom: Shattered Crystal and is set after the events of My Little Pony: Equestria Girls – Legend of Everfree. The latter adapts the storyline of Sonic Forces and takes place at the beginning of season 9 of Friendship is Magic.