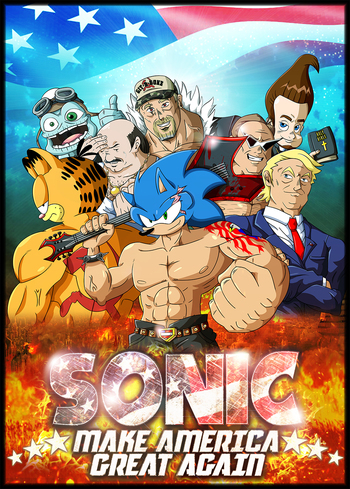 From left to right, back to front: Crazy Frog, Carl, Larry the Cable Guy, Alex Jones, Jimmy Neutron, Garfield, Sonic, and Donald Trump.
"Freedom ain't free. The tree of liberty must be refreshed from time to time with the blood of patriots and tyrants."
—Tupac Shakur
Advertisement:

Sonic the Hedgehog: Make America Great Again is a bizarre Crossover Troll Fic written by Americaversewarlord. Despite what the title says, it has almost nothing to do with the Sonic the Hedgehog series and features its characters In Name Only.

Sonic is re-imagined as a badass American warrior fighting to free the Americaverse from the clutches of the diabolical Communist Empire. Along the way he forms a team of like-minded patriots called the "Neo Biker Brethren", and they make it their mission to defeat the most evil Communists of them all: the dreaded Backstreet Boys.

It's pretty lengthy, clocking in at over 120 chapters shared between both fanfics as of early 2018. The story evolves considerably across its run, becoming incredibly dark while still keeping its signature So Bad, It's Good humor. It's something that must be seen to be believed.

Currently available on both fanfiction.net

. The story is a direct sequel to Sonic the Hedgehog: Defender of America, which can be read here

of one of the chapters made by Dorkly that's worth checking out.