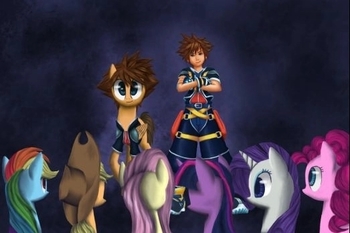 is a Fusion Fic between My Little Pony: Friendship Is Magic and the Kingdom Hearts universe written by author Codex92

Starting after the events in Kingdom Hearts 3D: Dream Drop Distance, Sora feels upset over having failed his Mark of Mastery exam whereas his two friends, Riku and Kairi, have become Keyblade Masters ahead of him. Feeling he needs more training before he can retake the exam, Master Yen Sid gives Sora a set of coordinates that leads him to a far-off world somewhere in the galaxy. Sora accepts without asking why and sets off for the unknown world. Due to being in a hurry and a non-stop flight on his Gummi Ship, it malfunctions as it arrives to the destination and Sora crash-lands in a field where he is found by a certain orange farm pony and her little filly sister. Thus, Sora's new tale begins.

The fic is written via inserting the ponified Sora (and other Kingdom Hearts characters) into the canon Friendship Is Magic storyline with different events happening or having different results due to someone else experiencing the event instead of a canon character. The story eventually adds elements of Kingdom Hearts III as the series began before the game came out, but leaves the changes in the story intact. The series is currently ongoing.