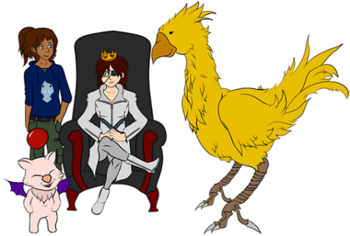 A Skittering Heart's Cover
There is more light inside our hearts than all the stars that we can see.
If you ever feel alone.
If you ever need me.
Just close your eyes and look inside.
I'll be there.
I promise.
Advertisement:

A Worm fanfic by Stewart92

written on the Spacebattles

web forum. It has been cross-posted to fanfiction.net

. Currently on its second thread

. A remake titled A Skittering Heart: Final Mix can be found here

A Skittering Heart is a crossover story between Worm and Kingdom Hearts. When placed under immense physical and psychological stress, instead of Triggering as a parahuman, Taylor Hebert awakens the power of a Keyblade from Kingdom Hearts. Armed with a weapon wielded by heroes and villains across the stars, Taylor sets out to be the hero Brockton Bay deserves… and ends up becoming a fashion model along the way.

The plot makes use of numerous minor characters from canon and original characters to build a very different perspective on the world of capes encountered by Taylor in-canon. Starting earlier than canon the story A Skittering Heart is both Lighter and Softer and, paradoxically, Darker and Edgier than the original Worm.

Warning: The story contains spoilers for both Worm and Kingdom Hearts.