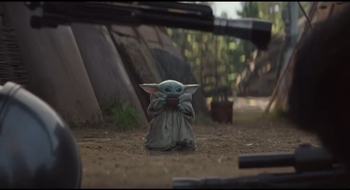 Mind me, do not. Just watching the show, I am.
Advertisement:

Stoic bounty hunter turned tired adopted parent ends up on one of his most difficult escort missions yet. And that's what The Mandalorian is all about!

Chapter 9: The Marshal
Chapter 10: The Passenger
Chapter 11: The Heiress
Chapter 12: The Siege
Chapter 13: The Jedi
Chapter 14: The Tragedy
Chapter 15: The Believer
Chapter 16: The Rescue