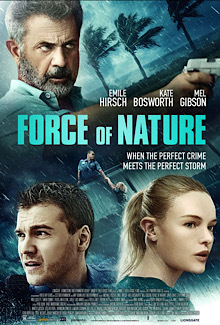 It's Die Hard in a Puerto Rican apartment complex! In the rain!
Advertisement:

Force of Nature is a 2020 action movie directed by Michael Polish and starring Emile Hirsch, Kate Bosworth, Mel Gibson, Stephanie Cayo and David Zayas. A mixture of disaster movies and the "Die Hard" on an X sub-genre of action thrillers, the movie is about an art heist in an apartment complex in San Juan, Puerto Rico, while a category-5 hurricane is ravaging through the island.

Although the robbers (led by a local criminal known simply as "John the Baptist", played by Zayas) are well-prepared for the raid, they run into unexpected obstacles when it turns out that a pair of beat cops (played by Hirsch and Cayo) are also present in the premises, in the middle of evacuating some residents who stayed behind. Oh yeah, and there is also a foul-mouthed ex-cop with his gun, Ray, who refuses to give in without a fight.

Compare with Hard Rain and The Hurricane Heist, two "Die Hard" on an X action flicks that also revolve around robberies under the cover of a storm.

In Force of Nature, when it rains, it pours, resulting in the following tropes: