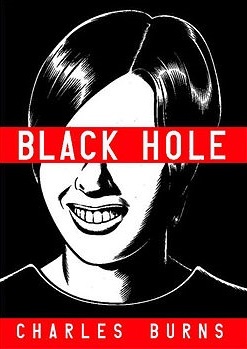 Black Hole is a twelve-issue comic book limited series written and illustrated by Charles Burns and published jointly by Kitchen Sink Press and Fantagraphics. Published between 1995 and 2005, the first four issues were released by Kitchen Sink Press before they went out of business, Fantagraphics took over. A compiled hardcover volume was released by Pantheon Books in 2005. The entire story is collected, but supplemental material shown on the covers and endpages of the individual issues are omitted.
Advertisement:

The plot of the comic series follows a number of Seattle teenagers who, over the summer, contract a mysterious sexually transmitted disease known as "the Bug" or "the teen plague," which causes them to develop bizarre unique physical mutations, turning them into social outcasts. In particular it follows four teenagers, Chris, Rob, Keith and Eliza, switching back and forth between their stories as they come in contact with and contract the disease.

The suggestion of a film has been up in the air for a while. In November 2005, the Comics Journal message boards reported that Black Hole would be adapted to film by the French director Alexandre Aja (Haute Tension). In March 2006, comics news site Newsarama reported that Neil Gaiman and Pulp Fiction co-writer Roger Avary would be adapting the screenplay, and in May 2006 Gaiman confirmed this in a Time magazine interview. Neil Gaiman and Roger Avary later left production with it moving to Paramount Pictures and the direction of David Fincher. Fincher abandoned the project to focus on the American remake of The Girl with the Dragon Tattoo.

Not to be confused with the webcomic written and illustrated by Doctor Glasgow.