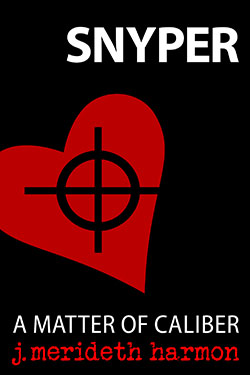 He's a god of love. And he's armed.
"Sure, I deliver love all right. But everyone conveniently forgets I can take it away just as easily. Or replace it with hate. Or leave you writhing in unrequited agony. I’m not Happily Ever After. I’m a god of suffering and torment and murder-suicides."
— Phil Bowman, Snyper: A Matter of Caliber

Snyper: A Matter of Caliber is a 2012 urban fantasy noir novel by J. Merideth Harmon, published by Harmsway Press.

A Darker and Edgier take on the classical Eros/Cupid mythology, the divorced, alcoholic god of romance finds his magic arrows bullets of love and hate pressed into service as a divine hit man. That is, until a major shooting assignment goes south and he quits Mount Olympus for a new life as Phil Bowman, a down-and-out private detective in New York's Lower East Side.

A free preview of the first five chapters is available here