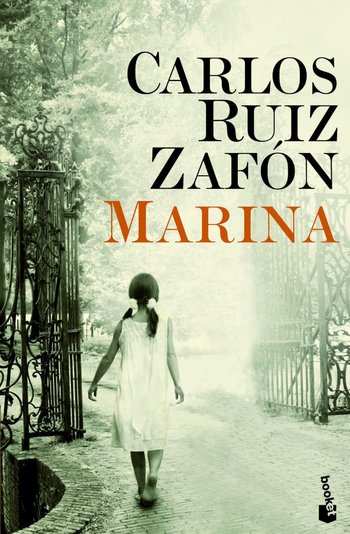 She had the key to all the secrets.
Marina is a 1999 novel by Spanish writer Carlos Ruiz Zafón.
Advertisement:

In September 1979, cynic Ordinary High-School Student Óscar Drai likes to explore the old parts of Barcelona during the little free time given by his depressing boarding school. His life is boring and anodine until in one of his walkouts he mets a dreamy, beautiful girl named Marina, who soon involves them both in a mystery that has its roots in the city's glorious past. Through the story, Óscar and Marina will be forced to solve an enigma that will threaten their very lives and whose sinister nature few could imagine, all within a world of nostalgia, decaying love and blurred memories. After all, as Marina says, sometimes we only remember what never really happened.

This novel has the distinction to be, in more than one way, the end of an age in Zafón's writing career. It was his very last work in the young adult genre, released after his juvenile Trilogy of Mist and before his flagship adult tetralogy The Cemetery of Forgotten Books, and also remains as Zafón's first, only and last stand-alone book.