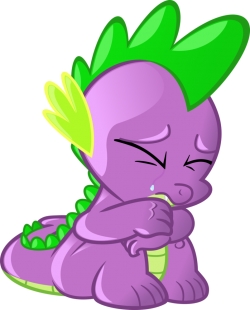 Alas poor Spike.
"I've had enough! If this is how I will be treated then it's over! I don't want to be friends with any of you!"
—Spike to the Mane Six

Circus Days is a My Little Pony: Friendship Is Magic fanfiction.

Spike had been felling down lately: under-appreciated, lonely and always left behind in the library while the Mane Six go around having fun. Then one day they visit a circus; the girls get lost in the fun, leaving Spike all alone. He accidentally meets the performers, and ends up on the stage. After that he is offered the chance to join the circus, leaving Twilight and the others behind. Will he do that?

Can be found here: