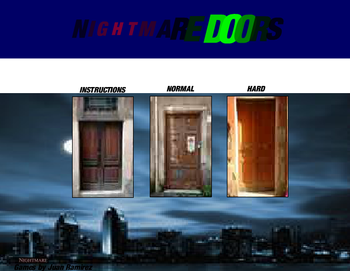 Yes, the title keeps flashing from red to green and back. Very scary!
You never wake up.
You girlfriend cried about you.
You brother was frustrated and angry.
Medical students played with your body and made jokes about your funny face.
Your liver was donated to Gayman.
Your parents decided to pull a plug.
...This bear just didn't care.
— The bad ending
Advertisement:

is a 2008 web game by juan ramirez, notable for its high degree of Nightmare Retardant. You are a Featureless Protagonist who faints after a car accident. This starts off looking like a Stealth Parody; later, it is revealed to be outright satire.