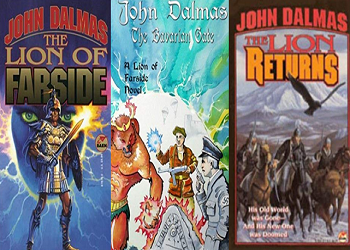 A trilogy of fantasy novels set in the years before and during World War II, written by John Dalmas.
Advertisement:

The first story kicks off with the main character, Curtis Macurdy, giving the readers a first-person monologue about his life starting with the time his uncle Will married an elven witch named Varia. Twenty years later, Will Macurdy dies, and Varia reveals that as she watched Curtis grow up, she fell in love with him. The monologue ends with Varia being kidnapped by her own people. Then the story really starts, with Curtis chasing after them to get his wife back.

The series includes both Historical Fantasy and regular High Fantasy settings, though it spends more time on the High than the History side.

Tropes involved in the setting: