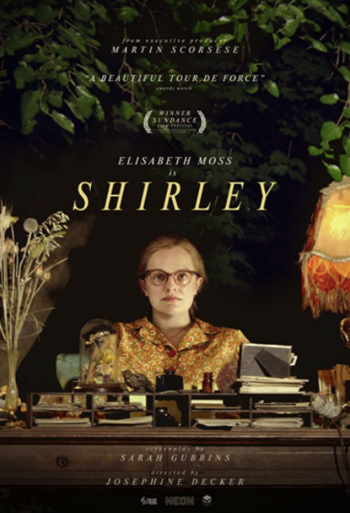 "What happens to all lost girls? They go mad."

Shirley is a 2020 biographical drama/Psychological Thriller directed by Josephine Decker (Madeline's Madeline). It premiered at Sundance before being picked up by Hulu for wide distribution later in the year.

Shirley Jackson (Elisabeth Moss) and her husband Stanley Hyman (Michael Stuhlbarg) take in a young couple, Rose (Odessa Young) and her aspiring academic husband Fred (Logan Lerman). As Shirley writes her new novel - which would become Hangsaman (1951) - she draws her inspiration from a real-life disappearance of a student at the University of Bennington and her growing attraction to Rose.

For the unrelated 1849 novel by Charlotte Brontë, see here.