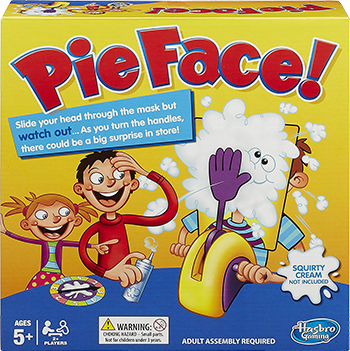 Pie Face! is a tabletop game by Hasbro and Rocket Games that came out in 2014.

Whipped cream (or a sponge) is put in the game's arm. Everyone spins the spinner to decide how much each player will turn the handle. The players take turns turning the handle, and every turn makes it more likely that someone will get splatted in the face with whipped cream. The goal is to reach 25 points by turning the handle enough times without being splatted.