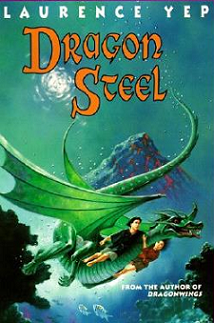 The second book in Laurence Yep's Dragon Series, first published in 1985. It starts off right after the events of Dragon of the Lost Sea, and is followed by Dragon Cauldron and Dragon War.

After defeating Civet, Thorn and Shimmer transfer her unconscious body to the undersea kingdom of Shimmer's uncle, High King of the Dragons, Sambar XII. In addition to Civet and the mist stone, King Sambar also wishes to take Shimmer's dream pearl. Shimmer creates an illusion to fool him, but Thorn, not knowing this, ends up landing them both in the dungeons, stripped of all their magics. While in the dungeons, they discover that Monkey had met up with a similar fate. Together with the help of Shimmer's former clan, the servant girl, Indigo, and a powerful being known as the Lord of the Flowers, all four escape from Sambar's palace, with Civet in tow.