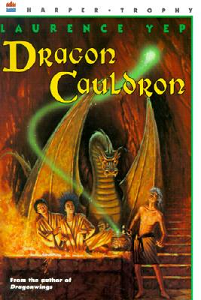 After escaping King Sambar XII's undersea palace, Shimmer, Thorn, Monkey, Indigo and Civet set out to repair Baldy's Cauldron, after it was damaged in the events of Dragon Steel. The five end up on an enchanted island that disables all magic and is impossible to fly or swim away from. A mysterious dog provides them a means of escaping, but doing this unwittingly unleashes the Nameless One into the world, an ancient and powerful evil.