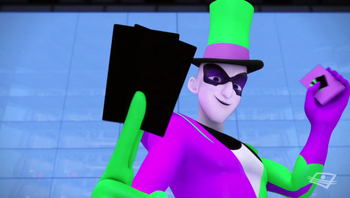 Simon Says it's over!
"I am Hawk Moth. You are now Simon Says. I will help you be the most powerful hypnotist ever. You will help me in return when the time is right, so do we have a deal, Simon Says?"
—Hawk Moth
Advertisement:

When Simon Girmault, a stage magician, is humiliated by Gabriel Agreste on live television, he is transformed into the supervillain Simon Says, who takes control of a zombie army to exact revenge.