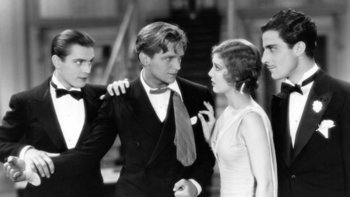 Loose Ankles is a 1930 film directed by Ted Wilde.

Loretta Young (who was only sixteen at the time) plays Ann Berry, a wealthy socialite. She is about to get richer, as her grandma Flora Berry has just died and the whole clan has gathered together for the reading of the will. The will reveals that Grandma left most of her substantial fortune to Ann, but because this is a movie there's a catch. Ann cannot get the money until she is married. And she only gets the money if she marries someone that her maternal uncle and aunts, Major Harper and his sisters Sarah and Katherine, approve of. And no one else in the family collects on their inheritances until Ann enters into an approved marriage. And if that weren't enough, Ann loses the money if she ever gets into any "scandal" or compromising position that draws negative public attention on her.

Ann, being the sort who won't take orders from a dead grandma, and also clearly not needing the money, sets out to create a scandal that will nullify the will. Enter Gil (Douglas Fairbanks Jr.), who is working as a male prostitute—uh, "professional escort". Gil answers Ann's "Male Hooker Wanted" ad and meets her at her apartment. Ann has already called the reporters, but it doesn't take long in the presence of handsome, bashful Gil for her to have second thoughts.