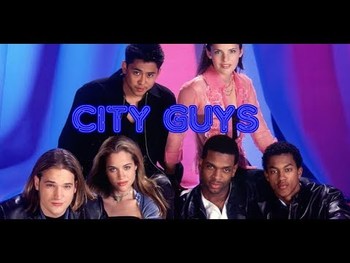 "C-I-T-Y. You can see why. These guys, the neat guys, smart and streetwise."
Advertisement:

City Guys was an American teen sitcom that ran from September 1997 to December 2001 on NBC, as part of the network's Saturday morning Saved by the Bell-clone block, TNBC. Created by Peter Engel (who was responsible for the vast majority of TNBC's shows, except for a small few such as NBA Inside Stuff) and Scott Spencer Gorden (a former writer for SBTB), the series centered on a group of students at the fictional Manhattan High School in an unidentified section of the New York City borough of Manhattan, specifically Chris Anderson (Scott Whyte), an otherwise normal upper-crust teen from Park Avenue, and Jamal Grant (Wesley Jonathan), who comes from a working class family in Harlem. Both boys transfer to Manhattan High (or "Manny High," as the school is usually called in-series) in the pilot episode "New Kids," where they're both revealed to have been troublemakers (Chris was kicked out of two schools, and actually was dishonorably discharged from military school, while Jamal was suspended during his first two years at his last high school and expelled junior year). Chris and Jamal don't get along at first, but despite their different upbringings, the two eventually become friends after realizing they're not that different.

Helping round out their group are Cassidy Guiliani (Marissa Dyan), an aspiring actress who serves as Chris' love interest; Alberto "Al" Ramos (Dion Basco), a cool guy grifter; and Dawn Tartikoff (Caitlin Mowrey), a smart girl who initially served as a Soapbox Sadie, before being turned into more of the smart girl. Lionel "El-Train" Johnson (Steven Daniel) is introduced in the pilot as the aforementioned school bully whom Chris saves Jamal from, but is given a Heel–Face Turn, becoming a likeable lunkhead (a seventh year senior at the start of the series) known for his constant malaprops. Finally, there's Karen Noble (Marcella Lowery) is Manny High's no-nonsense principal and Reasonable Authority Figure, who routinely catches Chris, Jamal and the others in their schemes.

The show is notable among TNBC shows for featuring virtually the same cast throughout its run (whereas the others have had some cast changes) and its racially diverse cast (consisting of three Caucasians, four African-Americans and one Filipino).

Also has a character sheet.