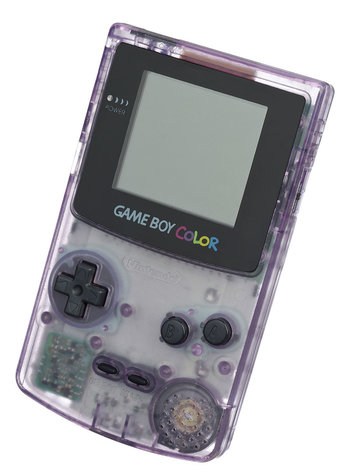 "Get into it!"
"Nintendo brings you this Game Boy game... in Color."
Advertisement:

In 1998, Nintendo basically enhanced the Game Boy parts to make a souped-up portable NES and sent out the resulting Game Boy Color into the wild. This made sense, since the Game Boy was similar to the NES already. Learning from the mistakes of the Nintendo 64, Nintendo made the Game Boy Color easy to develop for so that their handheld branch could retain their massive third-party support.

The Color's biggest selling point was, naturally, its ability to display color. This made it closer to the idea of being a portable NES than the original Game Boy, though the Color's larger color palette meant it was capable of producing more detailed sprites and backgrounds than the NES ever could. The Color could also overlay a handful of 10-color palettes onto original Game Boy games to give them a hint of color, though it was unable to use the color palettes of Super Game Boy–enhanced titlesnote A potential reason is because the Super Game Boy, naturally, had the SNES's color capabilities to work with, which are much richer and wider than the GBC's limited palette. The SGB also handled colorization with more than four colors fundamentally differently from how the GBC did. Games made specifically with the Game Boy Color in mind would include more specific and variable color palettes — many games were released that were compatible with both the older Game Boys and GBC, but later-released games would require a GBC. Color games compatible with the original model were typically encased in cartridges in a color different from the grey used for the Game Boy (typically black), while GBC exclusive games used translucent cartridges.

One of the handheld's more interesting features was the IR port, which could allow for wireless data transfer between two systems. While more convenient than the Link Cable since it wasn't a separate peripheral, the port's functions were limited in comparison (i.e. no multiplayer) and it was utilized by very few games. As usual for the Pokémon series, Pokémon Gold and Silver and Crystal were probably the most well-known users of this feature, allowing two players to "Mystery Gift" with each other once a day, basically creating random items for both players. The games could also communicate with a virtual pet, which could get the player a variety of items. Additionally, a Mission: Impossible game released for the Color had a function to turn the handheld into a universal remote by using the IR sensor.

The Color was well-supported considering it had a relatively short lifespan. Over 900 games were made specifically for it, with some being colorized re-releases of Game Boy games (often known as "DX" versions). Nintendo also made sure to publish a large number of high-profile first party titles: The Legend of Zelda, Mario, and Pokémon would all see multiple installments on the GBC, with Pokémon in particular providing the system's biggest Killer App via Pokémon Gold and Silver.

The total sales of the Game Boy Color are unclear, as Nintendo officially treats it as a revision of the original Game Boy and folds their numbers together. However, everything points to it being a huge hit; the highest-selling GBC game exceeded 23 million units.

The system lasted only a little over four years before retiring in 2003, as Nintendo had fully moved on to the Game Boy Advance and were preparing for the imminent release of the Nintendo DS in 2004. The Color is probably the most successful system ever to have such a short cycle thanks to its large library and high software sales.

In short, the system can't exactly run rings around the NES, but it can handle graphics just as intense without slowdown or flicker and exceeds it in some areas.