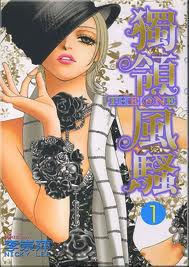 Not to be confused with The One starring Jet Li.

Cane Lele is a 16 year old high school student who, despite being the daughter of Taiwan's once greatest supermodel, has no real interest in fashion or the modeling world after both of her model parents died in a plane crash on their way to a shoot when she was still an infant. That all changes when she comes across a photo of world famous male supermodel Angus Lanson. So captivated by the expression in the black and white portrait, Lele decides right then and there that she will break into the industry just to get a chance to meet the man himself. This being a shoujo manhua, she doesn't have to wait too long until she stumbles into both him and his equally attractive older twin brother Eros.

The One is a romantic dramedy coming of age story about the modeling industry and falling in and out of love. Compare to Skip Beat!, which also focuses on a young girl breaking into the entertainment industry because of a potential romantic interest. However, whereas Skip Beat leans more towards comedy, The One dives deep into drama, especially in the later chapters during which the emotional highs and lows are more akin to a melodrama.

The One provides examples of: