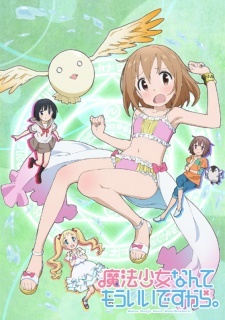 Mahou Shoujo Nante Mou Ii Desu Kara (roughly translates to "I've Had Enough Of Being A Magical Girl") is a parody of the Magical Girl genre that began publication in 2015. An anime adaptation aired as part of the Winter 2016 Anime season, followed by a second season in Fall 2016.

One day, Yuzuka Hanami comes across a mysterious creature foraging in the garbage. The creature, calling itself Miton, tells Yuzuka she has the makings of a Magical Girl and grants her powerful magical abilities. The catch? Her magical girl outfit is a two-piece swimsuit. Even Miton doesn't know why this is (it's meant to be "best fit" the wearer, though he doesn't seem to mind), but Yuzuka is mortified. Thus begins her career as a magical girl...

The Anime has two seasons, and each episode is about four minutes long, and are available to watch on Crunchyroll.