Music / Songs for a Blue Guitar 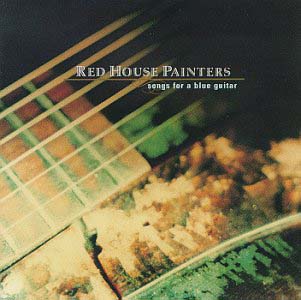 In 1996, Slowcore band Red House Painters were exhausted from endless touring and recording. After 4 years of tiring work, the band decided it was time for a break. Mark Kozelek, the leader of the band decided to pursue a solo career just for kicks. Songs for a Blue Guitar was the resulting album to come from this.

The album was known for its troubled production. After the minimalist atmosphere set in their previous album, Ocean Beach, Kozelek wanted to venture off into more experimentation and different styles. This caused the album to have a much more "Southern" feel to it. He also started to use much more guitar feedback and noise production for texture purposes. The result didn't impress 4AD Records, who threw Red House Painters off the label over something as petty as a guitar solo (namely the one on "Make Like Paper").

In desperation, Mark signed with Island Records to get the album released by its scheduled due date to please fans. The label, fearing lack of sales and profitability off of Kozelek's name alone, demanded it be listed as an Red House Painters album. Mark gave in and the album was released in 1997 to lukewarm critical reviews.

The album is full of reworkings of three Cover Versions that sound nothing like their originals, surprisingly uplifting lyrics from Kozelek who usually wrote about borderline suicidal subjects, and most importantly completely transforming Red House Painters'sound and giving way to what was to come with Kozelek's future project Sun Kil Moon.

The album's been Vindicated by History (more so than any other Red House Painters release) and is often cited as the seminal Kozelek experience. Starting off with a 3 and a half star rating on Allmusic.com in its original release to getting frequent 5 star reviews on later publications, it is now widely regarded as a classic in Folk Rock and Slowcore.

Tropes for a Blue Guitar: