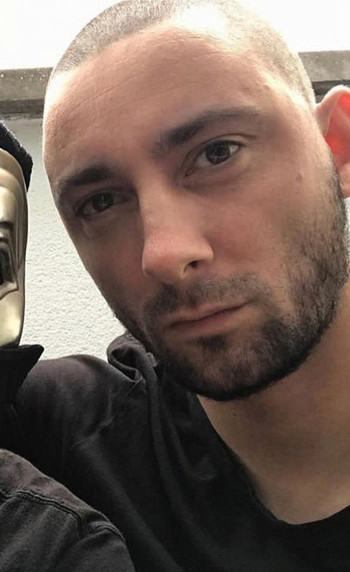 Burial (real name: William Emmanuel Bevan) is a South London-based musician commonly attributed to the genres of dubstep and future garage. He was the very first artist signed to Kode9's Hyperdub label in 2005.

Bevan is primarily known for his two highly acclaimed studio albums (Burial and Untrue), both of which are hailed as some of the greatest of their decade/genre, and his impressively enigmatic persona. He has never played a live show, rarely accepts interviews and makes few public appearances.

It took a borderline witch-hunt among UK tabloids to unearth his identity after several years of complete anonymity; even then, only three good photos of him exist on the Internet to this day (aside from the page image, cropped from a picture with Kode9, there's also his MySpace profile picture

and this straightforward selfie

Bevan has a distinctive sound composed of pitch-shifted vocal samples and meticulous breakbeat patterns surrounded by vinyl crackle and rainfall, making for more atmospheric and intimate listening experiences compared to his contemporaries. His tracks are often described as being like the soundtrack to cyberpunk or film noir, which is an apt description.

He also claims to make nearly all of his music in the audio editor Soundforge, disavowing the traditional trackers and sequencers that eventually brought Drum and Bass to a creative standstill.

Bevan has collaborated with several other dubstep and drum-and-bass artists, and plans have been announced to have him remix Massive Attack's Heligoland, though when this will occur is anyone's guess. The release of a limited-edition 12" featuring two, roughly 10 minute long remixes of two Massive Attack songs (one released, one unreleased) have led many to wonder whether it is the end product of the album collaboration rumours.

After Untrue, he shifted his focus to longer, more progressive songs, frequently lasting for over 10 minutes and often released in EP formats.