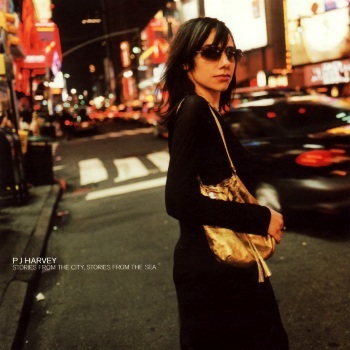 This is love that I'm feeling! Even in the summer, even in the spring. You can never get too much of a wonderful thing!
Advertisement:

Stories from the City, Stories from the Sea is the fifth studio album by PJ Harvey, released in 2000. It was a notable New Sound Album for the singer because the sound is more accessible than her earlier records, yet remained true to her Alternative Rock roots. Widely acclaimed as one of her best albums, Stories followed in the footsteps of To Bring You My Love and helped make Harvey an icon in her native England. It also allowed her to break into US markets thanks to its lyrics centered toward New York City, where she lived for about a year before the album's release.

Harvey has stated that the album was a culmination of her musical concerns at the time, a reconciliation of her more Deliberately Monochrome attitudes with melodic sections interpolated throughout the record. Her music was tied to other best-selling female artists of The '90s such as Alanis Morissette and Tori Amos, while she gained a foothold in the Alternative Indie revival during the Turn of the Millennium. Additionally, in the wake of The War on Terror, Harvey's music became more popular as it resonated with New York listeners, who were healing from the devastating terror attacks.

Stories is best remembered for the hit singles "Good Fortune", "A Place Called Home", and "This Is Love".

Bonus track in the UK and Japan:

So I trope my good fortune...