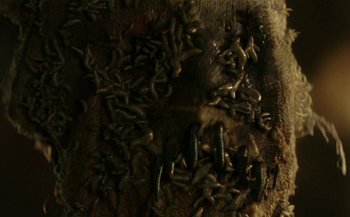 "Who knows you're here? WHO KNOOOWS?!"
"Gentlemen, time to spread the word. And the word is... panic."
— Ra's al Ghul
Advertisement:

Batman Begins meant the start of a new continuity in film. However, it also meant a Darker and Edgier start.