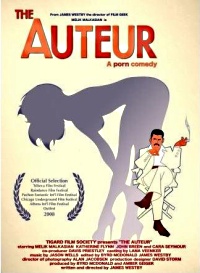 Consisting of roughly equal parts of Francis Ford Coppola, Werner Herzog, and Gerald Damiano, Arturo Domingo is a man obsessed. Obsessed with his work, obsessed with his reputation, and obsessed with the woman who left him. He is an Auteur. A filmmaker with an uncompromising creative vision, a burning desire to bring his vision, and only his vision, to the screen. A vision grounded in hardcore pornography. Catapulted to fame with his first, breakout film ''Five Easy Nieces'', at the peak of his career he produced such erotic masterpieces as, ''Requiem For a Wet Dream'' and ''My Left Nut''; all in partnership with friend and collaborator Frank E. Normo, who he "rescued" from a career as an accountant. During this idyllic period, he met and married Fiona, his obsession with her rivalling his obsession with filmmaking.

But during the production of his seminal masterwork Full Metal Jackoff, things went very very wrong. Plagued with setback after setback, his patience and temper grew short and frayed; and he retreated into a world where nothing but his film existed, made worse by by his increasingly heavy drinking. Fiona soon snaps, and walks out on him, in the most devastating possible way. Executive Meddling destroys Full Metal Jackoff; and he has a breakdown, turning his back on everyone involved with the film, including now-former friend Frank. Following his breakdown, he produces a string of uninspired and lackluster films; and seems doomed to slide into obscurity.

Years later, Arturo has traveled to a film festival in Portland, Oregon to receive a Lifetime Achievement award; and screen the Re-Cut of Full Metal Jackoff, restored to his original vision. However, there is trouble looming that threatens to push him over the edge. His latest and most ambitious epic, Gang Bangs of New York is having financial difficulties which threaten to kill it before filming starts. Worse yet, Portland is the home of his now-ex wife Fiona; whom he has never gotten over, and for whom his obsession still burns. And if that's not bad enough, also in town is Frank E. Normo, now a huge star with his own hit Cable TV/Internet porn show. Along the way he encounters enthusiastic fans, rabid Hatedom, and pot-smoking hippies. The film is Arturo's struggle to recover his spark, his wife, and his former glory; while shooting some beautiful girl-on-girl action.