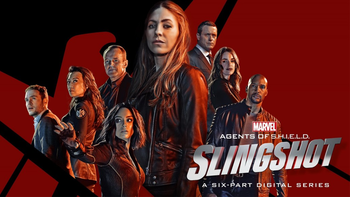 "So maybe we should get our stories straight about that night?"
— Elena "Yo-Yo" Rodriguez to Daisy "Quake" Johnson
Advertisement:

Marvel's Agents of S.H.I.E.L.D.: Slingshot is a series of six webisodes that serves both as a spin-off to Agents of S.H.I.E.L.D. and as a prequel to Season 4 of the show. It was released online on December 13th, 2016 as part of the winter break. It stars Natalia Cordova-Buckley as the Inhuman/Secret Warrior Elena "Yo-Yo" Rodriguez as the protagonist, with the main characters of S.H.I.E.L.D. (Clark Gregg as Agent Phil Coulson, Chloe Bennet as Daisy Johnson, Ming-Na Wen as Melinda May, Iain De Caestecker as Leo Fitz, Elizabeth Henstridge as Jemma Simmons, Henry Simmons as Alphonso "Mack" MacKenzie, and Jason O'Mara as Director Jeffrey Mace) as supporting characters.

Elena "Yo-Yo" Rodriguez is about to sign the Sokovia Accords and officially become a S.H.I.E.L.D. asset; however, in signing the Accords, she forfeits her right to pick and choose her own assignments and there is one assignment in particular that she wants: to stop Victor Ramón, a Colombian arms dealer who killed Elena's cousin.

There are a total of six webisodes, and each is three to six minutes long:

Tropes that are part of Agents of S.H.I.E.L.D.: Slingshot: