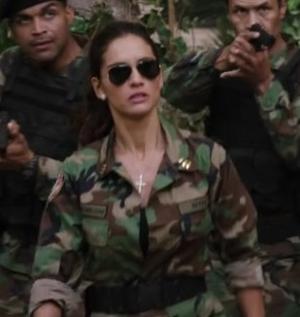 Camilla Reyes with some of her men.
Advertisement:

The team is called in the investigate an 0-8-4 (code for an unknown object) in Peru. The agents are ambushed by a Peruvian military squad led by one of Coulson's old flames, Comandante Camilla Reyes (Leonor Varela). They get ambushed again, this time by Peruvian rebels, and are forced to retreat from the combat zone under fire. The S.H.I.E.L.D. agents soon find the thing that's causing all this trouble: an immensely powerful object that might be an ancient alien artifact, but is definitely (in Coulson's words) "much, much worse" than a nuclear bomb. The agents and Reyes' team attempt to fly the artifact to a S.H.I.E.L.D. facility, but an unexpected betrayal leads to a literally explosive climax.

The second episode of Agents of S.H.I.E.L.D..