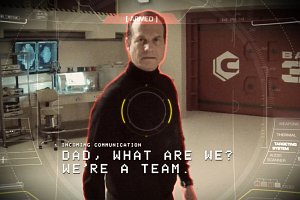 Now that HYDRA has revealed themselves and S.H.I.E.L.D. has been disbanded, Coulson and his team are on their own to take down the now-missing Clairvoyant. The finale will address Ward's true allegiances as well as answer questions about Skye's lineage, who's controlling Deathlok and what the Clairvoyant wants with Coulson.

Call-Forward: The image that Garrett scratches onto the glass board is the same as he sent Akela to recover, the mission where Ward doubled as her. These images become incredibly important in the second season.

Trip goes over the mountain, uses a literal noisemaker to grab a car, uses it to blast a hole in the wall, they enter Cybertek, grab the leader, and get him to lead them to the hostages—specifically, the one literally named Ace. At which point, they win.