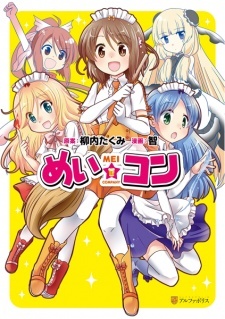 Mei Company (Mei Kon) started out as a manga that Youji Itami, the main character of Gate, enjoyed reading from time to time. Takumi Yanai, Gate's author, started writing an actual manga for it in 2015. It is now complete with eight chapters.

Mei Sakuragi was a Magical Girl Warrior who was forced to retire when her powers waned to the point she could no longer fight effectively. Learning that retired magical girls have little hope of going to college and finding a job, she managed to start her own small cleaning service, Mei Company, or Meicom for short. She quickly hires her old partners Itsuki Mizuta and Helene, and together, they have adventures adjusting to their new lives as cleaners, while the current generation of magical girl warriors continue to defend the city from the forces of evil in the background.