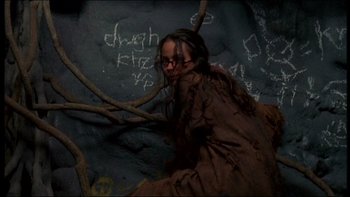 Angel, Wesley, and Gunn are shocked to see Cordelia has been crowned princess of Pylea. She jokingly demands their heads be cut off, but quickly clarifies she is joking. After she dismisses the guards, Cordelia recounts how, because she was "cursed with the sight", she was declared princess. Lorne confirms his people have a prophecy that a messiah who is cursed with "the sight" will come to restore their monarchy, which has been empty for several millennia. While Wesley, Cordelia, Lorne, and Gunn discuss how to leave Pylea, Angel discovers that he can see himself in mirrors, lamenting over the way his hair looks.

Lorne takes Angel to his family's house, where his family starts to chase Lorne away, as they consider him to be a traitor. However, his cousin Landok identifies Angel as a hero who saved his life, and the people celebrate Angel, who is made the special guest of their upcoming village feast. He then tells stories of his adventures to the people of Pylea while Lorne is ignored. Landok offers Angel the honor of "swinging the crebbil in the Bach-nal," and Angel agrees to take part. But when he arrives, he discovers that it means beheading a human so the people of Pylea can feast on her. Winifred "Fred" Burkle is brought forth, but Angel refuses to kill her. Instead, he grabs her to escape, and Lorne makes good the escape by singing "Stop, In the Name of Love," which causes severe pain to the Pyleans—theirs is a world without music.

While perusing the castle library, Wesley discovers "the cursed one" will have to perform something called a "com-shuk" with a Groosalugg. He considers asking the priests to translate the book, until he realizes it is part of a three-volume book marked with a different animal on the cover of each volume. The three animals are wolf, ram and hart, meaning that the books (and therefore the priests) likely have some connection to the supernatural law firm that plagues them back in Los Angeles. Wesley concludes that they cannot trust the priests. Silas, one of the priests, arrives to inform Cordelia that the Groosalugg has been summoned and that the "com-shuk" is a mating ritual. Wesley, Gunn, and Cordelia try to escape through a sewer tunnel, but Cordelia is caught by the priests and dragged back to her throne. Heavily guarded, Cordelia worries about mating with the demon, until Silas introduces the Groosalugg, who turns out to be a handsome and muscular young male who looks fully human.

Fred leads Angel to a cave where she has been hiding for a long time. Fred talks nervously as she crazily scribbles on the cave walls. Angel finds Fred's driver's license and realizes she is the girl from Cordy's vision, and that her scribbles are advanced physics, as she had been a graduate student in the field back in LA. She doesn't believe him when he tells her of her life in LA and how she got to Pylea, because she is too traumatized—she thinks she has been decapitated in the square, or has gone crazy. Angel convinces her that this is not true, and that he can rescue her. They make their way to the castle, but soon, they are attacked by guards. To fight them, Angel shifts into his vampire mode, but instead of his usual vampire face, he becomes a mindless demon, a green creature with spikes and ridges on his face, and brutally rips through the guard's body with his super-sized teeth. The other guard runs and Angel takes off as well, leaving Fred frightened and alone. Wesley and Gunn wander around lost, looking for Angel, until they are attacked by a green demon wearing Angel's clothes. The demon immediately attacks Gunn, and during the fight, Wesley recognizes Angel's tattoo. He tries to call to Angel, to see if he responds to his own name, but to no avail. A short distance away, Fred coats her hand in blood and is able to lure Angel away from his friends with the smell. Wesley helps Gunn with his wounds, and the former realizes that, as they're in an alternate dimension, the balance that Angel has in the human world has been disrupted. This means that he has accidentally revealed his pure, unaltered inner demon.

Back at Fred's cave, Demon Angel sees his reflection in water and is suddenly motivated to switch back to human form. The ordeal leaves him shaken. In the forest, Gunn and Wesley are surrounded and tied up by rebel humans who want to send a message to the castle—they believe that Wesley and Gunn are spy-cows. Wesley tries to convince the rebels that they know the princess and suggest they use them to contact her. The rebels agree, but their idea involves decapitating the men and putting a note in the mouths of their severed heads. Fred comforts Angel as he painfully deals with the aftermath of being controlled by the demon inside of him. He concludes that his friends saw what he really was and now he can never go back to them.

The Groosalugg tells Cordelia that his human qualities make him unappealing to his people, so he battled with demons to end his existence, but instead of being killed by them, he defeated them, winning great honor as a warrior and earning the title of Groosalugg for his bravery and strength. Cordelia is, understandably, smitten. Lorne is brought before Cordelia for judgment and he is almost sentenced to death, but Cordelia pardons him and then kicks him out so she can be alone with her future mate. Cordelia explains to the Groosalugg that she is not a princess, but he doesn't believe her because he sees that she fulfills the prophecy. This emboldens her and she decides to start writing proclamations and laws for the people of Pylea. Silas tells his fellow priests that the princess has requested paper so she can write proclamations. He is angry at her independent will and goes into her chamber with a platter and kicks out Groosalugg. He tells her she and Groosalugg are just tools of the covenant and she will do what she is told. Cordelia refuses to accept that, until she is shocked into silence as Silas reveals Lorne's severed head displayed on the platter.