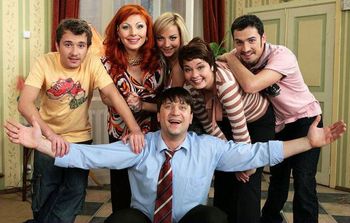 "Let's pretend we're happy to be together"
Dasha: We, the Bukins, never call each other names. We have neighbors for that.
Dasha: Gena, why do you never take me to the beach?
Gena: What's the point? You just find your way back.
Advertisement:

Sounds familiar? Well, it should.

Happy Together is a Russian remake of Married... with Children which aired on the Russian network TNT between 2006 and 2013. What makes it particularly notable is that the remake not only covered (almost) all of the original episodes, but also had over a hundred new episodes, some of which were co-written by the original Married...with Children writers, kind of a semi-official continuation of the beloved series.

Other notable characters that were adapted from the original series:

Some few characters were created for the new episodes:

. Reading our Useful Notes on Russia might help you enjoy the series. Now has a recap page.

The adapted episodes provide examples of the following:

The new episodes provide examples of the following: