Literature / The Dragon Below 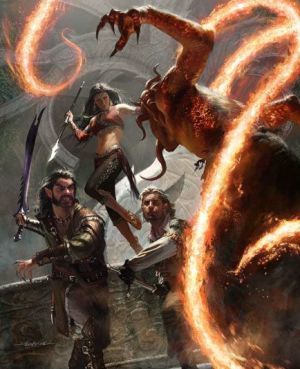 The Hall of the Revered lies beneath the Spires of the Forge.
Enter the door above the tangled valley.
Look neither left nor right. The riches there are not for you.
Hold to the path that leads to the Hall and find what waits in the shade of the Grieving Tree.

A trilogy of Eberron novels by Don Bassingthwaite detailing the adventures of a shifter named Geth, a wizard named Singe, and a kalashtar named Dandra who has a dark secret. The three are joined by many more on their quest to stop the Servant of Madness, the priest of the Dragon Below, Dah'mir, and the barbarian tribe known as the Bonetree that he controls. Notable among novels based on D&D campaign settings in that it doesn't suck. The three books in the series are:

Also has a sequel trilogy written by the same author and using some of the same characters, The Legacy of Dhakaan.