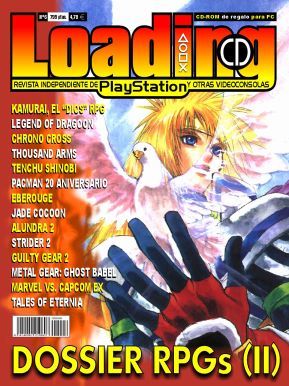 One of the special issues, in this case it was about the JRPG genre.
Loading was an independent Spaniard videogames (and also Anime) magazine published from 1999 to earlier 2000s (when its Spiritual Successor Gametype lasted a few years) originally published in both Spain and Latin America by the defunct Spaniard publisher Ares Multimedia (Gametype was published by Megamultimedia) with twelve published issues (plus some specials about specific games, companies or genres and a online anniversary edition published in 2014 published in PDF format)

What made those magazines so special was the fact both magazines were the few Western magazines that dealt exclusively about Japanese videogames (especially those who were only released in Japan), something who was extremely unusual in a country like Spain in that time. It was also notable for its no-punches-pulled style of writing, not to mention, unlike similar magazines, both magazines only reviewed Japanese games: Any kind of Western-developed not only were not reviewed, but also it were always criticized, to the grade to be self-xenophobic at times.

The brains behind Loading and Gametype was Sergio Herrera (aka Serukun, formerly Mr. Karate as he is a big fan of fighting games) plus a somewhat changing group of collaborators.

Loading was cancelled after Herrera and the rest of the staff had a fallout with their published regarding the awful distribution of the magazine and the fact they didn't get paid for writing most of the articles of the magazine, and most of the stuff went to another publisher, when Gametype was born (along other sister magazines: Anitype, Hentype and Yaoitype) but they lasted less time than Loading.

After a few years, Herrera managed to publish an anniversary edition, published in PDF format, especially dedicated to the remaining fans of the magazine in his Facebook page, and without changing his publishing style at the slightest.