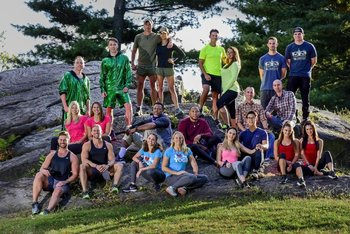 The 30th installment of title series.

In this season, described as "most competitive season ever", it boasts quite possibly the “most competitive” group to undergo the perennial hunt for red and yellow flags and includes an Indianapolis 500 Winner, former NBA All-Stars, competitive eaters, and a pair that came essentially straight out of this season’s Big Brother house to hit the race running. Host Phil Keoghan describes the casting as selecting the people who are the best in their field. The season premiered on January 3rd, 2018.

The season was one of the better outputs in recent years, if divisive. On the one hand, it contained an ugly rivalry between two dating couples in which neither team was likable and it had some unfortunate eliminations early on. Often times it felt poorly produced such as having many tasks either too easy or too linear, extensive Rubberband AI that placed all the teams on the same flight every leg, but the most grating example was going three consecutive legs without a Roadblock with one of those legs also lacking a Detour. Alongside that, many legs had one side of the Detour clearly easier than the other. Furthermore, not only were both the Fast Forward and the Express Pass removed, but the U-Turn before a Detour returned and two new twists were introduced to varying degrees of success (the Partner Swap and the Head-to-Head). However, it did produce several likable teams and every leg had multiple placement changes, resulting in five different winners in the first five legs, offering the competitive edge that the show promised. Ultimately, the finale was what divided fans the most. Despite it having an epic Final Exam Finale, it produced one of the most controversial winners in the show's history. Nevertheless, the new time placement put it at its highest ratings since Season 13, leaving fans hoping this season won't be its last. 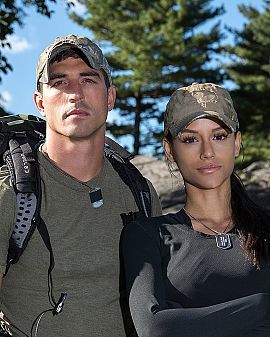 Newly dating couple from the recently concluded 19th season of Big Brother, with Cody winning the "America's Favorite Houseguest" prize of $25,000. They established themselves as frontrunners early on, winning the second leg, and became early favorites to win. Starting with the second French leg, though, they found themselves finishing in the bottom two for five legs in a row due to Jessica's frequent whining (though one of these finishes can be attributed to the Partner Swap). It was this whining and their sometimes questionable gameplay that earned her the ire of fans and Brittany. Nevertheless, they soldiered on and started to look more threatening towards the end with back-to-back second place finishes. In the finale, they wavered between first and second, especially when they failed a taxi. Luckily for them, the incredibly hard memory task allowed them to catch up and they found all the pieces before anyone else. Henry's accidentally replacing the right piece with a wrong piece allowed Jessica to catch up and win, allowing them to earn the distinction of becoming the first Big Brother team to win The Amazing Race. This grand prize win redeemed their poor showing on Big Brother and let them begin work toward starting their happy family, as Cody proposed to Jessica around the time the season finale aired, extending their victory celebration. 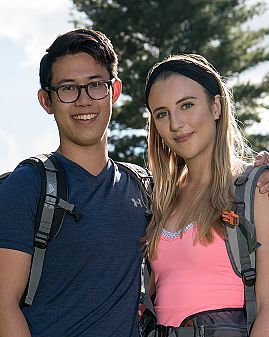 Dating Yale debate teammates. They stood out early when they struggled at the very first Head-to-Head challenge in Belgium, but soon proved they could step it up when they need to after winning the following leg. From then on, they became a middle-of-the-pack team, with the two having their argumentative moments (mainly due to Evan's competitive spirit). They also distanced themselves from other teams as the race wore on, causing them to be seen as outcasts. However, they ultimately survive both a U-Turn and a Speed Bump during the race, becoming the third team to bounce from last to first after completing said Speed Bump, and were one of the favorites heading into the finale. Though they arrived at the memory task last after falling behind at the Ball Park challenge, Henry was shown to have reached the right answer first. He then made a tragic error of trading that piece out before checking to see if he was right. This allowed Jessica to beat him out and they ended up in 2nd. 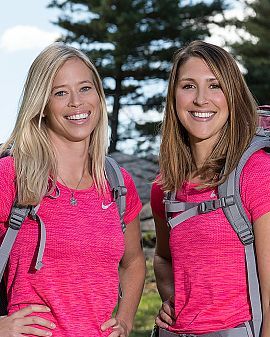 Professional skiers and X-Games champions. As the last female team standing early on, they hoped to become the fourth all-female team to win the Race. They quickly established themselves as a threat, for even though they only won two legs, they were the most consistent team - only placing below third once (during the partner swap when Kristi got stuck with Jessica). As a result of this and their cordial gameplay, they became early favorites. Alas, they began to falter towards the end as their emotions ran high, scraping by in 3rd in the 10th and 11th legs, but they still managed to make the finale (being the first all-female team to do so since Season 25). They caught an early lead when they were the only ones who thought to look up Willie Mays homeruns before going into the task and burned through the fortune cookie task. However, Jen ended up struggled more than anyone else with the final memory task and they finished tearfully in 3rd place. 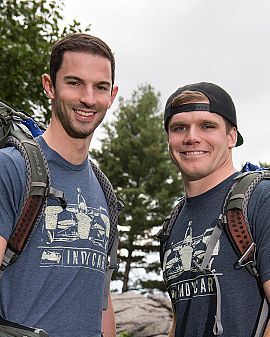 IndyCar Series racers; Alexander is notable for winning the 2016 Indianapolis 500, while Conor is one of two racers in the series struggling with diabetes. They never took the race very seriously, with Conor often cracking jokes about the tasks. However, this didn't impact their performance at all - by the 10th leg, they had become the only team left to not finish in the bottom two at some point. Riding off three leg wins (four with the partner swap), they appeared to be shoo-ins for the finale once they arrived in Hong Kong. Indeed, despite a brief hiccup at the Detour, they were one of the first teams to arrive at the final task: looking for signs on the street and using the corresponding leg numbers to open a suitcase. Unfortunately, they over-analyzed the signs they found (thinking that the Washington Square Arch was the Arc De Triomphe) and they ultimately ended up behind the trailing Kristi & Jen, sending them home in 4th. This complicated an agreement between the drivers because they share an apartment together and agreed to move out at the end of the race as incentive to win, but mused their winnings would let them add another month to that deal. 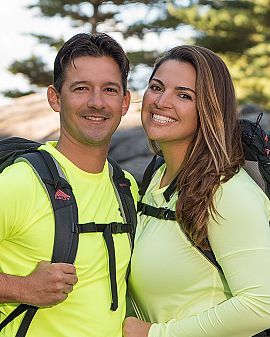 Conor: First rule of the Amazing Race Club: always have your passport on you.

Dating (later Engaged) lifeguards. They were unknowingly in sync with the others' desires to tie the knot. They were a middling team for the first few legs, barely escaping elimination in the third and fourth legs. However, they pulled ahead on the fifth leg and claimed first place, after which Lucas proposed to Brittany. From then on, they seemed to be more put together team, though they weren't necessarily perceived as a threat, due to their occasional flaws with directions. After back-to-back first places on the seventh and eighth legs, Lucas lost his passport during a connecting flight. Through their tenacity, they were able to get a temporary passport and fly to Bahrain, but they were unfortunately too far behind at this point to survive and were eliminated overall in 5th. 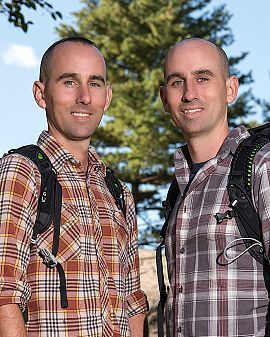 Twin brothers (the only family-related team this season) and firefighters. Both of them have near identical Southern accents and faces, and a dry wit and knack for cracking puns. Notably, Eric is a father who has recently added a third member to the family, just days before shipping off to compete in Season 30. They struggled early on with directions and only survived due to a few lucky breaks, but surprised fans with much more consistent placements from the 5th leg onwards. Though they had initially been Out of Focus, they still became one of the fan-favorites of the season with their spirited and overall pleasant demeanor. While the U-Turn gave them a healthy buffer on Leg 8, they focused more on practicing than performing on the singing task, which allowed Jessica & Cody to overtake them and they were eliminated in 6th place. 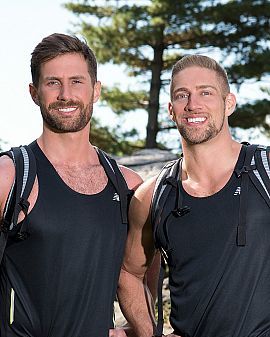 Violinists who are both members of the group Well Strung. They also share an apartment. They showed a lot of promise in the first 4 legs placing at the upper half of the standings. Once in France, they got horrendously lost and while they were saved by Joey & Tim's critical mistake at the Detour. As the last team in the running to depart, they were in dire straits the whole of Leg 6. This left them on the 2nd flight to the Czech Republic. Cody & Jessica then U-Turned them, and while they did fine on both sides, it put them behind long enough that they were eliminated. 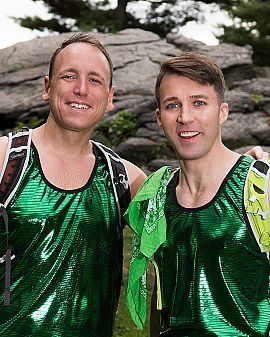 Competitive eaters. One of Phil's favorite teams, but a bit lunk-headed when it came to some challenges where they didn't realize the full extent of what to do and it caused them to quickly fall through the ranks. Finally, in Europe, they got totally turned around and chose a Detour everyone else had unbeknownst to them avoided out of fear of the difficulty, and were summarily punished by its complexity. They came in eighth place and Phil had to regretfully tell them they were eliminated, with the duo thinking their run had been cut short all too soon. 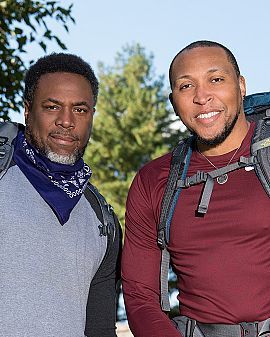 Former NBA players, "The Matrix", and the host of the radio talk show "Nothin' but Net", respectively. Cedric is the oldest competitor of the season, approaching his fifties, and has survived a trio of heart attacks, but trying to prove that won't kick him. Shawn was formerly an NBA champion in 2011. In the third and fourth legs of the race, Cedric participates in the Roadblock challenges but his age takes its toll. The team finishes last on a non-elimination leg for the third Pit Stop, and is then briefly waylaid by a resulting Speed Bump in the next leg, and they lose to a struggling Lucas and Brittany in the Head-to-Head Competition as the last arrivals at the Leg 4 Pit Stop, finally running out the clock on their game. 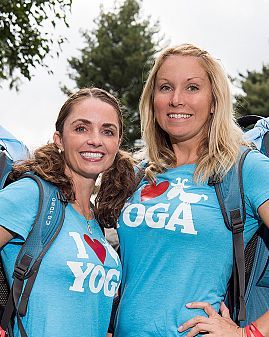 American Ninja Warrior athletes and Goat Yoga instructors. They started off in the back of the pack thanks to poor navigation, but managed to just barely avoid elimination over Dessie & Kayla due to Sarah beating Dessie to the pitstop by literally inches. They remained in the back of the pack the next leg in Belgium, and their decision to go for the harder Diamond Glint Detour kept widened the gap between them and the other teams. Though they were able to come back after Eric & Daniel made the decision to switch Detours, a new twist called the Head-to-Head put them in a race for last between them, the firefighters, and Henry & Evan. Henry learned from his mistakes, allowing him and Evan to take 8th, which left April and Daniel in a final race to avoid elimination. April took the early lead, but spun halfway around allowing Daniel to catch up and eventually take the lead, leading to her and Sarah's elimination in 10th. 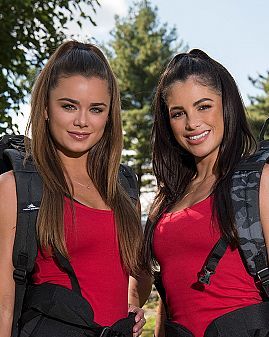 Instagram and Sports Illustrated swimsuit models and ring girls. They came in as the underdogs and fell behind early on when they got lost in Reykjavik. Despite this, they were never truly in last during the first leg. Despite leaving the Roadblock with a healthy buffer between Cedric & Shawn, they had trouble parking at Ingólfstorg, allowing the former NBA players to catch up and outlast a 30-minute penalty. They were in better shape than the Goat Yoga Instructors, allowing them to catch up in a footrace, but in what was the closest finish in Amazing Race history, Dessie stepped on the mat last, causing them to be eliminated in 11th and last place.