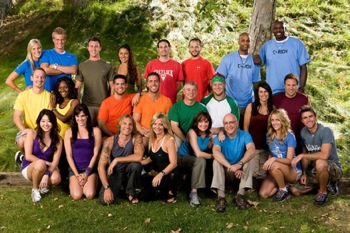 The fifteenth season of the Race started with the show moving in a new direction. After four seasons of increasingly strategic play that saw the traditional powers of the series, the young physically fit teams, dominated by the smart teams, the show found itself with its strongest, fittest cast since Season 6. On top of that, it was the most heavily Stunt Cast group of teams yet, with, among others, professional poker players, a former Miss America, and a pair of Harlem Globetrotters. However, the results of the season were universally disappointing, with many fans calling it even worse than the Family Edition. The complaints ranged from the course being far too easynote Though the swine flu epidemic didn't help production in that regard, forcing the producers to make several changes to the course to compensate, to one team dominating for most of the season, while three other teams quit tasks they were unable to do (including unscrambling a five-letter word and going down a water slide), and, despite all the Stunt Casting, the teams were, for the most part, were largely forgettable or unlikable. However, it did end up having several of the series' most memorable moments, produced two teams who went on to play major roles in the much better Unfinished Business, and introduced the Starting Line challenge and the Switchback, which would become staples in later seasons. Because of this, opinion on the season did soften over time, and though it was not one of the series' best, Season 15 was not the complete disaster that it was perceived to be when when it first aired. 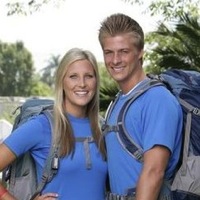 Dating couple, they were both physical threats, and took advantage of the lack of true mental threats on the seasonnote with Zev & Justin and Maria & Tiffany both being gone by leg 7 to dominate their competition, tying Nick & Starr's records for leg wins in a single season and consecutive leg wins, and became only the second team to rack up a finishing average of at least 2.00note after Eric & Jeremy. The problem is, on top of making the season predictable with their constant winning, they were also very wholesomely bland, making them doubly boring to the audience. In the finale, they went from 1st to last when they struggled to figure out what was the most famous casino in Monaco, but made their comeback on the final chip counting challenge to win the race. 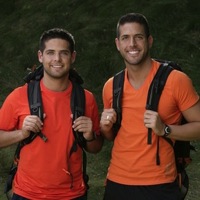 Gay brothers, they started fighting early in the season and never stopped. They quite possibly spent more time arguing than any other team in the series, even more than the young fighting couples who normally fill the role of the "fighting team," as most of their dialogue during tasks involved them yelling at each other. By the end of the season, they seemed to be the only team willing to play cutthroat, and rode a couple of shrewd moves to the Final 3. They would hit the chip counting challenge in the finale first, but were passed up by Meghann & Cheyne when they failed their first attempt at it, and finished 2nd. 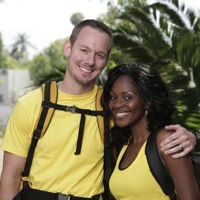 Miss America 2004 and her husband. They seemed in over their heads from the very beginning of the season, trusting more in Karma to win them the game than their racing skills, and only finished above 3rd once despite making the Final 3. Twice during the season they dug themselves into massive holes, falling behind by more than an hour, only to be saved because Maria & Tiffany and Flight Time & Big Easy decided to quit tasks, and made the Final 3 despite repeatedly making stupid mistakes and failing to read their clues. In the finale, they got a lead following the rappelling Roadblock, but lost it when Ericka fell apart during the Cirque de Soleil challenge. Any chance they had to catch up was destroyed at the final challenge, when their dealer made a mistake while counting their chips, delaying them when they had already finished their task, and they finished 3rd. 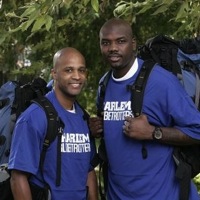 Teammates on the Harlem Globetrotters. They were a popular team from the very beginning, as they brought the same high energy and good-natured antics to the Race that they brought to the basketball court. They knew as Globetrotters they would be popular with people they met around the world, and took advantage of that fact, getting tons of help from from both locals and American travelers they met on the course. They made it deep into the season thanks in part to all this help, where Big Easy's tendency to butcher mental tasks would be their undoing. Faced with unscrambling the name "Franz," he faltered, deciding to take a four-hour penalty when he was unable to complete the task. This would prove too big of a deficit to overcome, as they were sent directly to the Pit Stop to be eliminated in 4th. Due to their popularity, they would be invited back for Unfinished Business. 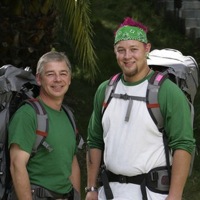 Father and son team from Montana, they had a distant relationship while Matt was growing up, and were attempting to connect with each other for the first time. While they were a solid team, they found themselves behind early in leg 9 due to incurring a Speed Bump in the previous leg (by being the last team to both start and complete the hay bale Roadblock). Already having to play catch up, Matt struggled with the secret message Roadblock, dropping them even further behind and ensuring their elimination in 5th place. 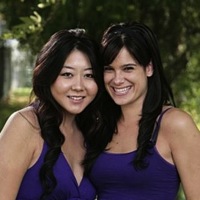 Professional Poker Players, they started off as the obvious villain team due to their decision to hide from the other teams that they'd raked in over a million dollars in winnings at the poker tables, and tell them they worked for a charity instead. Their lie immediately came to light when Tiffany was recognized while standing in line at the airport in the second leg, which caused a bit of resentment with the other teams. While thisnote And their personality clash with fan favorites Zev & Justin earned them the ire of many of the fans, a portion of the fanbase immediately took to them for being the only female team cast against four male teams (at a time when a female team still hadn't won the race, and fans were eager to see it after seeing Dustin & Kandice and Jaime & Cara come so close), and having an open and honest attitude that was not playing up to the cameras (something that was particularly rare in this season). They persisted despite several close shaves, until they fell in 6th place when they were unable to complete either Detour choice on leg 7, and had to quit. 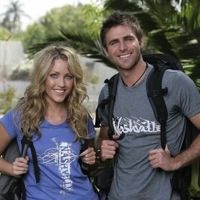 Canaan: Get a grip. Come on. A million dollars to go down a slide. Really?

Dating country singers. They did nothing to stand out for the first five legs of the Race, and, as they were always at the back of the pack, they kind of faded into the background. At least until the sixth leg, when Mika suffered one of the most hilarious and embarrassing breakdowns in the show's history. Afraid of both heights and water, Mika found herself frozen and unable to go down a six-story water slide, allowing Flight Time & Big Easy to pass them and they were eliminated in 7th. Despite saying in their Elimination Statement that her meltdown wouldn't effect their relationship, Canaan broke up with Mika at the Elimination Station. 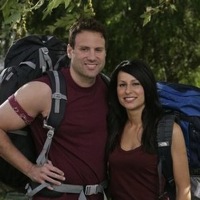 Lance: The truth of the matter is, we're the lions, and some of these teams are running like a pack of gazelles or zebras, and we're gonna take 'em down.

Lawyer and his fiancee. Lance came off as an egotistical blowhard after he made a number of boastful statements about his own abilities and prognostications about how they would do on the Race, only for them to run a mediocre five legs. Despite the supposed brains that come with him being a lawyer, his loud, aggressive attitude got him labeled a "meathead," and his repeated mistakes did nothing to alleviate this opinion with the other teams. They would get lost repeatedly in Dubai, dropping them out of the Race in 8th. 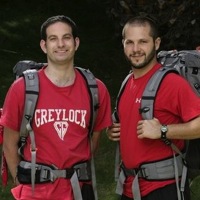 Screenwriter (the son of Revenge of the Nerds director Jeff Kanew) and his friend with Asperger Syndrome. They were easily the most popular team at the outset of the season, and, like most Inspirationally Disadvantaged teams, they dominated the airtime for the first three episodes. Things seemed to be going great for them during the fourth leg, they got a great cab driver, and, despite Zev struggling through the monkey mimicking Roadblock, they managed to hit the Pit Stop first. However, they quickly discovered they were missing Zev's passport, and as they could not locate it before all the other teams checked in, they were disqualified from the Race in 9th place. Their massive popularity and heartbreaking elimination got them invited back for Unfinished Business, where they would go on to be one of the stars of the season. 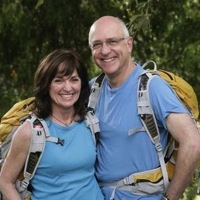 Older dating couple, they were eliminated in the third leg when they were the only team to choose the Word Play Detour, and subsequently botched it. After spotting their six letters, instead of finding a local to help them unscramble then word like they were supposed to, they instead tried looking around their immediate area for words containing those six letter. By the time they got help, they had fallen so far behind that the other teams had finished the Roadblock by the time they arrived, and they ended up 10th. 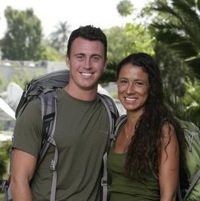 Couple who had been dating on and off for seven years, and were looking to make a final decision about their relationship. Despite arriving at the duck herding Roadblock in 2nd, Jessica struggled with the task, dropping them to last and eliminating them in 11th place. 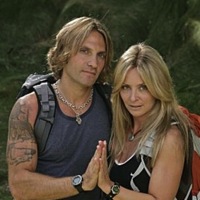 Married yoga teachers. They were eliminated at the Starting Line when they failed to find the correct license plate before all of the other teams, and as such are the only team to never leave the country.