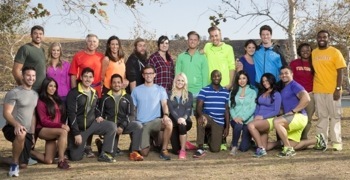 Announced at the end of the previous season, the 26th edition of the Amazing Race was called a "special edition" of the series, featuring eleven couples, five of whom were meeting for the first time, going on the ultimate "Blind Date" around the world. This announcement was met with much skepticism by the fanbase, stemming from both how Season 6 had turned into non-stop bickering amongst its top 6 of young couples, and the thought of having five manufactured teams, when the two previous manufactured teams, Eric & Danielle and Mark & Mallory, had both turned dysfunctional having no experience of how to deal with each other under stressful situations, not to mention how, for the first time in show history, there would be no all-female team.

As feared, the season did have its glaring flaws. The lack of variety in relationships led to a majority of the teams being very similar, which was made worse by the Blind Date teams, for the most part all but ignoring the "dating" aspect of the show, instead playing nice and focusing solely on the game. The lack of standout characters was only compounded by the show's focus on the romance aspect of the season, which led to a number of visually impressive, but rather easy and straightforward legs, resulting in a number of predictable eliminations. However, despite the failure of the concept, the season did not turn out to be the complete disaster fans feared, as while the teams were not overly entertaining, they were, for the most part, pleasant to watch. And the manufactured teams did VERY well, with all the final 3 teams being Blind Date couples. Finally, a number of tweaks (the most notable being the return of the "eat, sleep, and mingle" segments for the first time since Season 14) gave the show a not unwelcome "throwback" feel. 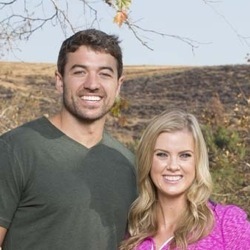 Blind Date couple, app developer and talent booker from California. Despite Laura professing her attraction towards Tyler early and often, they put off any sort romantic relationship in order to focus on the game, bonding over their snarking about the other team. They were both quite competitive, and had a high level of confidence in their abilities, which resulted in consistently good performances. In the finale, they went into the final task neck-and-neck with Jelani & Jenny, but were able to figure out the order of their selfies first, resulting in them winning the Race. 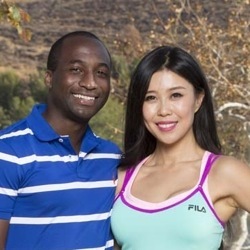 Blind Date couple, lawyers from New York and Los Angeles. From the Starting Line it was obvious that they had no attraction towards each other, but this did not seem to hinder them at first, as they won the first two legs. However, over the course of the season their clashing personalities caused them to butt heads over race decisions, which led to inconsistent performance. Still, they were able to pull themselves together enough to make the Final 3, where they managed to get a slight lead on Tyler & Laura in the final memory task. They would have trouble placing their selfies in the right order, which ended up dropping them to 2nd place. 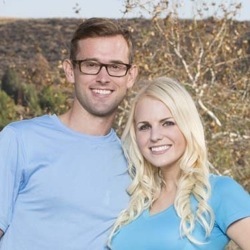 Blind Date couple, a navy physician and a nurse from Florida. Of the paired teams, they had by far the most issues, with Hayley constantly yelling at Blair for ignoring her (usually correct) suggestions. Despite a complete inability to communicate with each other at first, they managed to create a working relationship, and after a rocky first two legs, they were a fixture in the top three, turning into the season's most consistent team. While they were never able to fully resolve their fighting, they won the two legs leading into the finale, and had a solid lead heading into the rappelling Roadblock, with a clear path to victory ahead of them. However, Hayley missed the correct flags leading them to the next task, instead leading them to a nearby parking garage. By the time they managed to course correct, they were so far behind that they were doomed to 3rd place. 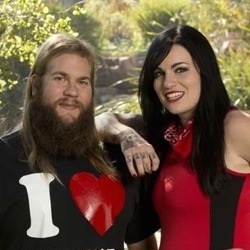 Dating couple from Michigan, Rochelle is a single mom using the Race to determine Mike's place in her son's life. Despite a number of struggles, both on tasks and with navigation, they managed to limit their bickering, and what fights they did have were quickly resolved. While they spent a lot of time in the back of the pack, they managed to stay in the game thanks to keeping their mistakes small while other teams imploded around them, and they managed to be the last previously dating couple standing. However, their luck would finally catch up with them over the final two legs, as a trio of bad cabs (a flat tire in leg 11, followed by a cab driver who refused to wait for them at AT&T Stadium and a second cab that was low on gas in the finale) dropped them to the back of the pack, and when they reached the first Roadblock, just like the previous season, Phil was waiting to inform them that the task's cattle had all been rounded up by the other 3 teams and they would be unable to participate in the Roadblock, meaning they were eliminated in 4th place. 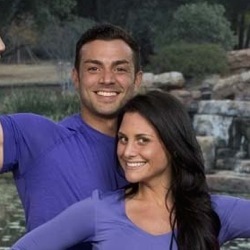 Dating hairstylists, they came into the season looking like the average bickering couple, whose constant mistakes would doom them to an early exit. However, standing on the mat at the end of the third leg, Matt decided to propose in front of the majority of the remaining teams. Their edit shifted after that, focusing more on the positive aspects of their relationship than the negative ones. Though being mistake prone kept them from ever truly becoming a frontrunner, they did manage a couple of top two finishes, and even won the 7th leg. However, Matt struggled with the klompen Roadblock in leg 9, which resulted in them getting non-eliminated at the end of the leg. The resulting Speed Bump penalty, combined with them overlooking both the shoe shine shop where their Speed Bump was located, and the shop which held the starting point for the much faster Mamas Detour, resulted in them ending up in last for the second straight leg, and being eliminated in 5th place. 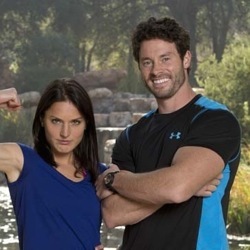 Dating Olympians who met at the 2014 Sochi Winter Olympics. They cruised through the first half of the season, running at the front of the pack while avoiding friction with each other and the other teams. However, they struggled once they hit Namibia, as a series of mistakes, beginning with Aly struggling to build her hut at the Roadblock, dropped them to the back of the pack. While Steve's reckless driving on the way to the Pit Stop resulted in them getting a flat tire, they were saved by a non-elimination leg. However, they never stood a chance in the following leg, as the lack of an equalizer, combined with Steve struggling with the air drop Roadblock, kept them from ever catching up with the other teams. As a final nail in their coffin, they were U-Turned by Tyler & Laura, and they were eliminated in 6th place. 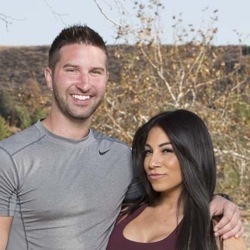 Blind Date couple, Jeffrey is an account executive from Florida, Jackie is a dancer from Las Vegas. Of all the blind dating couples, they were the only team to show a true romantic spark, which resulted in their developing relationship getting a large amount of airtime. Their inconsistent performance came to a head in leg 6, when they got on one of the last helicopters to Monaco, and they spent a large amount of the leg battling with Matt & Ashley to avoid last place. They caught a lucky break at the Monte Carlo when the roulette wheel wound up sending them to the faster of the two Detours, and though they left the Detour in 3rd place, their struggles to locate the Pit Stop dropped them right back to last place, and they were eliminated in 7th place, promising to keep in touch with each other after the Race. Jeff & Jackie would later compete in Big Brother 17 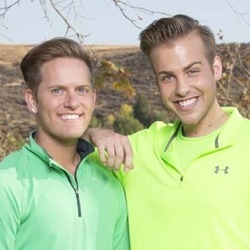 Blind Date couple, Bergen is a human resources project manager from California, Kurt is a pageant consultant from Kentucky. Due to their similar looks, they quickly decided that there was no romantic connection between them, and decided to run the race as friends. Much to their own shock, they won the fourth leg, but ended up hitting a bump in the following leg when they had trouble had trouble Driving Stick. Though Bergen seemed to be getting the hang of the manual transmission, Kurt became so uncomfortable that he forced Bergen to give up driving and take a cab to their next destination. This caused them several issues, the first and foremost being that, since the entire leg involved navigating themselves around the German countryside in that Ford Focus, they had no way of getting themselves from task to task other than sporadic public transportation. On top of this, they received a two hour penalty for being unable to complete the Winter Wonderland task, which involved using a feature of their carnote separate from the further penalty they would have gotten for taking public transportation had they ever made it to the Pit Stop. As it happened, they got themselves so lost taking the train from location to location that they never even made it to the Detour, and Phil came out on the course to eliminate them in 8th place. 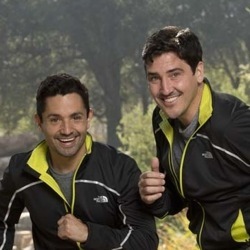 Dating couple, Jonathan was a member of New Kids on the Block. After running a rather quiet first two legs, they ran into trouble booking a flight from Tokyo to Phuket. They arrived nine hours after the other teams, who all managed to book flights that got in the night before, and missed the scheduled departure times that had bunched up everyone else. Although they survived that leg due to a non-elimination, they missed the first flight the next day, arriving in Bangkok almost two hours behind the other teams. Starting so far behind, coupled with doing a rather complicated Speed Bump, led to their elimination in 9th place. 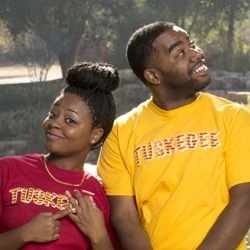 High-School Sweethearts who have been together for ten years, which has left Libby with the overwhelming desire to get married, something C.J. did not share. After getting repeatedly lost and barely avoiding elimination in the first leg, they started the second leg in last place and an hour behind the other teams, with no equalizer to catch them up. They then proceeded to dig themselves in a deeper hole by missing their train to Nagano because they were taking a selfie together. They ended up not seeing a single other team the entire leg, and were eliminated in 10th place. 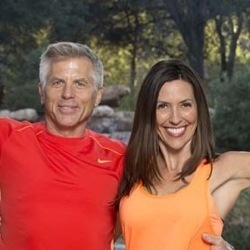 Dating couple, they worked together as a pilot and flight attendant for 16 years before Jeff asked Lyda out following her divorce. Though the got on the first flight, they got caught up in the huge bottleneck at the Syncing Steps Detour, as they and eight other teams took turns trying to match the correct choreography. They were the last team to complete the Detour, taking nearly four hours, and showed up at the U-Turn mat to find themselves having been U-Turned at the hands of Mike & Rochelle. While they were able to complete the Samurai Sake Detour rather quickly, the time wasted on the U-Turn was enough to drop them out of the Race in 11th place.