Season 6's initial drawing point was the Hotter and Sexier cast, including a former Playboy Playmate, fitness trainers, professional wrestlers, and the prerequisite models and actors. Though it might have the most attractive cast ever, all of the friend and family teams were eliminated early on, meaning the top 6 teams were made up entirely of young couples, and that meant there was fighting... a lot of fighting. With five of the top six teams constantly at each others' throats, the highest concentration of equalizers of any season of the show, and one of the most hated winners ever, it's easy to say that it is not one of the more popular seasons. When you also take into account that it was sandwiched directly between the much more beloved Seasons 5 and 7 (the seasons airing with just three weeks separating them), means that Season 6 is not as fondly remembered as some others. Not everything was bad, though. This was the first season to have a mandatory Roadblock split, forcing the teams to split the Roadblocks evenly between them, thus making it much harder for a strong racer to carry a weak teammate through the game. With several memorable moments, including possibly the most heart-wrenching elimination in the show's history at the end of the third leg, and an increased level of difficulty, the season does have its fans. 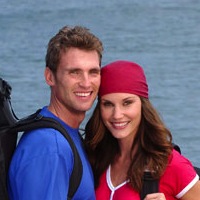 Dating models, and one of the most hated winners ever. For the most part, they were bland and under-the-radar, but quickly earned the ire of the fans when Kendra started insulting every culture they visited, saying that Sri Lanka smelled and that the people in Africa kept "breeding and breeding." In comparison, Freddy was less offensive, but nowhere near likable enough to make up for Kendra's ugliness. An above-average team, they easily made the Final 3. In the finale, they did worse than Kris & Jon on all the tasks, but found two different superior flights to get the tiny bit of a lead they needed to win. 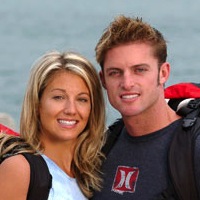 Long distance dating couple who loved anything and everything about life. Quickly became fan favorites due to their amazing attitudes, and dominated most of the season. The only couple in the top 6 who didn't constantly bicker, they made it all the way to the end, only to lose when they got stuck at a train crossing on their way to the Finish Line. Due to their strong relationship and racing attitudes, they were selected as one of the 15 teams that Phil Keoghan wanted to see race in All-Stars, but they were replaced by the hybrid team Eric & Danielle from Season 9. 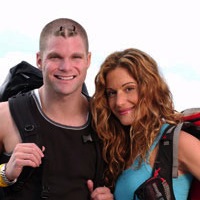 Dating fitness trainers who started off normal, but then Adam descended into, as the Race put it, "Being afraid of almost everything he faced." This greatly frustrated Rebecca, and their relationship deteriorated over the course of the race. Despite never finishing in the top half of the field they made it to to the Final 3, where they were never quite able to get on the same flight as the other two teams. Rebecca would go on to be a cast member on the Bravo reality show Work Out, where she would start dating the show's main subject, Jackie Warner. 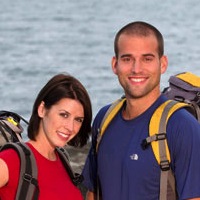 Dating actors remembered mostly for Hayden's cleavage. They were the second best team for most of the season, but found themselves stymied by bad cabs and a Luck-Based Mission in the penultimate leg, and wound up in 4th. 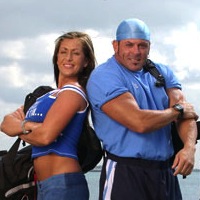 Lori: It's so cold my implants are frozen.

Married professional wrestlers. The season's "strong team" in place of an alpha male team, Lori is the physically strongest woman to ever run the race. They wound up 5th when they misread a clue and Lori had to run back down a mountain to retrieve a ticket that she had left with Bolo. 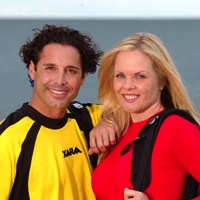 Playboy Playmate and her husband. Jonathan was annoying, loud, abusive, and is quite possibly the most hated contestant ever. He constantly yelled at and verbally abused his wife, culminating with him shoving her on the way to the leg 5 Pit Stop. He was so bad that Phil named him as the one racer he didn't want to see back on All-Stars. They would appear together on Battle of the Network Reality Stars and Reality Stars Fear Factor. Victoria would later make frequent appearances on the reality shows Work Out (with Rebecca as her physical trainer), The Girls Next Door, and Kendra. 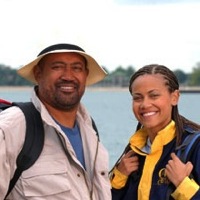 Pilot and his daughter hoping to work out their differences. However, Gus became notorious for refusing to listen to his daughter. They finished 7th. Unfortunately, they're more well known as the worst case of "Funny Aneurysm" Moment in the entire show after Hera fell prey to a psychopath. 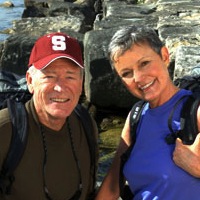 Married Grandparents who are collectively the oldest team to run the race at an average age of 67.5 note They were later tied by Meredith & Gretchen, who competed in the next season. They made constant mistakes, which included accidentally taking Adam & Rebecca's car, that kept them in the back of the pack. They were eliminated in 8th place in Germany after getting lost. 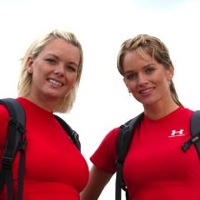 Mormon sisters and models. Expectations were high after the first two legs, then they hit the Hay Bale Roadblock. They fell prey to one of the most brutal Roadblocks in Race history, finishing 9th. They remain one of the more memorable teams from the era despite lasting only three legs. 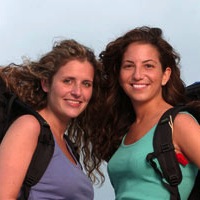 Friends and Roommates from Queens, they constantly fell behind due to Maria's complete inability to drive stick shift, and they finished in 10th. 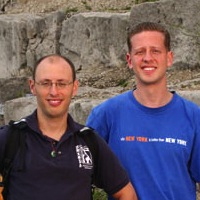 Jewish friends from Brooklyn and the only male team on the season, they were eliminated first when they ignored the advice of their alliance-mate Gus.