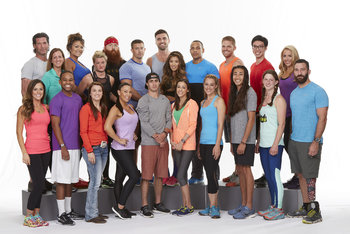 The 29th installment of the title series.

This season, like many in the past few years had a theme. This time it was all strangers teaming up. Naturally, there was backlash from the fanbase after the use of strangers teaming up in the past hasn't turned out well. Despite a shaky start with some rather unfortunate eliminations in the first two episodes, the premise far surpassed fans' expectations. The cast was one of the most memorable and charismatic of recent years, with a lot of variety in team dynamics. In addition it was extremely competitive especially when compared to the previous season, which allowed many fans to overcome the issue of the intense fighting often seen. This was best exemplified when a new twist, three Double U-Turns before a Detour were all used in the season. While there were a number of Shocking Eliminations, several of them unfortunately eliminated the best teams remaining in the last few legs leaving an uninspiring Final 3. Compounding that was having one of the most poorly received finales in the race's history and an unpopular winner. Nonetheless, the season ended on a positive note and many fans hope that the strangers twist will be used again in the future. 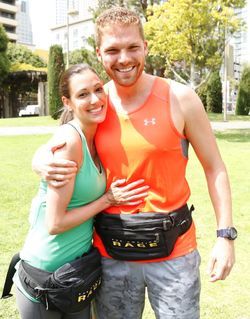 Attorney and Harvard University Recruiter and winners of The Amazing Race 29 and easily one of the more controversial winners of The Amazing Race. Either beloved for being competitive and cutthroat with their use of U-Turns and social strategies and huge fandom of the Race or derised for Brooke's unique way of psyching herself up for challenges, it is tough to find anyone who watched the season without an opinion on them. Throughout the Race, they both faced challenges - in particular, Brooke's physical ladle-making Roadblock in Leg 4 earned a lot of both backlash and support online, while Scott had to face his fear of heights in Legs 2, 5, and 9. Despite this, they worked together incredibly well in the last few legs. In the season finale, Brooke and Scott were the 1st team to arrive at Chicagoland Speedway. Despite having issues repairing the racecar wheel and completing a lap in a certain amount of time, Brooke and Scott were able to complete the task first and never gave up the lead once in the final leg thus securing an easy victory for them. 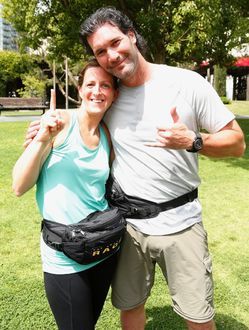 Army Parachutist and Police Sergeant. They were initially brushed off by the fans due to Joey being the last to finish the Starting Line task and finishing with mediocre placements. Once they were able to catch up to the other teams, they became a permanent part of the top of the pack alongside Matt & Redmond and Becca & Floyd. Entering into the final leg, they were considered to be the favorites to win the Race after the latter two were eliminated. However, during the Chicago Landmarks task, Tara and Joey went to a wrong location when searching for the Chicago Water Tower which eventually cost them the Race as they finished in 2nd. 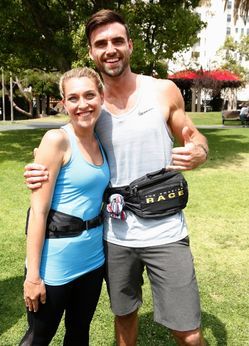 Street Artist and Orthopedic Device Representative. In a season where there were a lot of big characters, both good and bad, they never really stuck out. Them constantly placing in the middle of the pack and a lack of conflict left them to be one of the most Out of Focus teams in the history of the race. Had they won, London and Logan would have had one of the worst finish averages among Amazing Race winners. In the final leg, London and Logan were the last team to arrive at the Chicagoland Speedway challenge, but London had issues replacing the racecar's wheel while Logan couldn't complete the lap in time. They couldn't catch up to the other two teams in Chicago and finished the Race in 3rd. 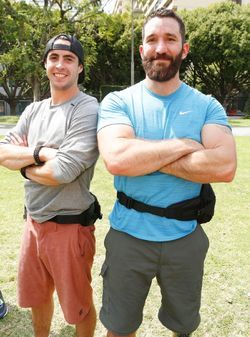 Professional snowboarder and Iraqi veteran. Redmond Ramos was the 2nd Amazing Race contestant to race with a prosthetic leg after he lost it in an IED explosion. Redmond initially left a bad impression on the fanbase with being competitive to the point of outright hostility. Though this was quickly dropped and fans warmed up to him when he output his competitive nature in a more healthy way and took his missing leg in good humor. Throughout the Race, Matt and Redmond had dominated the competition and were one of the favorites to win the whole thing after finishing in the top 2 from Legs 5-10. However, in Leg 11, they took a risk by traveling to downtown Seoul via subway instead of taxi and missed a transfer line. They then fell even more behind by having a bad taxi. Eventually, due to Tara's struggles on the Street Fighter V Roadblock, Matt and Redmond caught up, but Tara was eventually able to finish the Roadblock as she and Joey made it to the pit stop thus causing the Boys to fall short of the final 3. 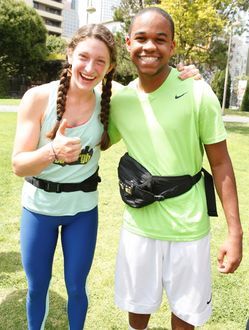 Rock Climbing Instructor and College Drum Major. They quickly became the big personalities of the season for their Fun Personified natures leading to being the fan-favorites. This attitude didn't hinder their abilities as despite a couple of hitches, they were consistently one of the stronger teams. After getting on the first bus in Leg 10, they looked to be in a comfortable position. However, Floyd struggled tremendously on the bicycle Roadblock, as he dropped many shrimp traps along the way and had to retrieve them. To make things worse, the entire leg was run on bicycles so he was too tired to continue and collapsed due to heatstroke. Eventually the medical team had to intervene, but by then their race was all but over and Phil had to come and eliminate them in 5th. 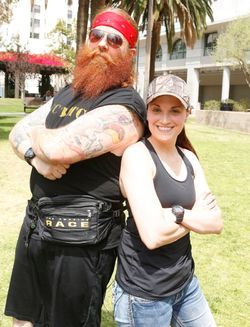 Auctioneer and Butcher. Their poor sense of direction nearly got them eliminated on the first leg (they finished last but were saved by Kevin and Jenn's penalty), but somehow managed to win the next two legs. They established themselves as a solid team until falling apart in Norway, as Mike's refusal to listen to Liz during the Detour caused them to finish in last, but it was a keep on racing leg. They finished in last again in Venice two legs later, but this time it was a non-elimination leg. With a Speed Bump ahead of them in Greece, everything that could go wrong for them did. First, they missed a turn, and Mike refused to turn around despite Liz's urging. Then they discovered that they were U-Turned, and Mike didn't take his own goat during the For the Groom side of the Detour, forcing them to redo it. And while they were still slightly ahead of Becca and Floyd (the other U-Turned team), it was ultimately the Speed Bump that did them in, as it allowed Team Fun to pass them up, eliminating them in 6th. 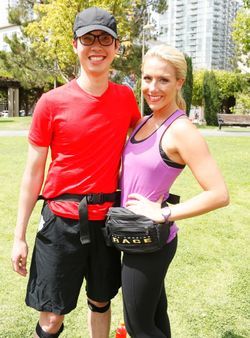 Wall Street Analyst and Real Estate Agent. Out of all of the teams they were easily the most polar opposite team on the race. This dynamic between the two led them to working together well on some legs and falling apart on other resulting in roller coaster placements. In Leg 6, they got off to a good start, but couldn't find the cluebox for the Detour and ran back and forth looking for it. Any chance of them catching up was ruined by them being U-Turned and they were eliminated. 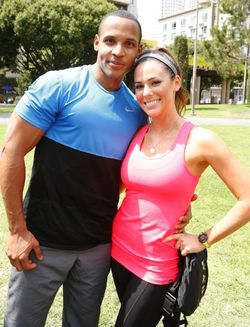 Bank Associate and Realtor. After a reasonable placement in the first leg, they revealed themselves to have a terrible team dynamic with Shamir being very accident prone and freaking out whenever he got hurt and Sara being very catty and controlling. Their race dissolved in Leg 4 in Zanzibar when they struggled on the "Royal Doors" Detour, searching for the doors with bad directions for over an hour. They switched, but this still cost them the ferry with the other teams. Despite getting through their other Detour just fine, by the time they reached the Roadblock, everyone had left. Shamir struggled with the difficult metal working Roadblock and Phil came to the location to eliminate them in 8th place. 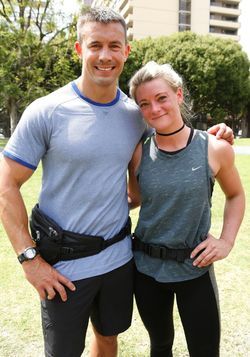 Police Officer and Firefighter. Their teamwork managed to win them the first leg of the race and place in 4th in the second. However, they were Blind U-Turned by Tara & Joey in the third leg, and their struggles with the weaving task in that Detour, which they were forced to complete, led to them being eliminated in 9th place. 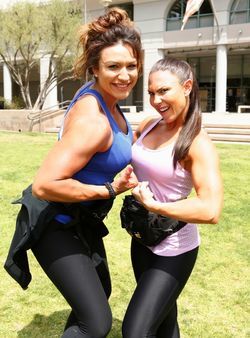 K-9 Police Officer and Army Officer. The two formed a very fast friendship after meeting. Surprisingly though, despite both being incredibly athletic and getting along great, they put on an uninspiring 2 legs. After placing 9th on the first leg, they had a disastrous 2nd leg. Their low placement on the previous leg doomed them to a late flight and they couldn't find the woman on the marked bicycle for an unbelievably long time. This delay was long enough that even Shamir injuring himself and taking 5 attempts to finish the Roadblock couldn't fix and they were eliminated in 10th place. 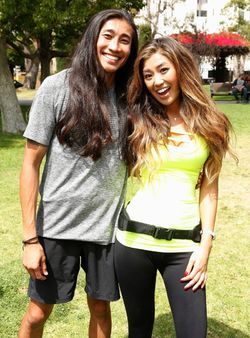 Model and Athletic Trainer. From the start, they seemed to have been one of the better matches as they never argued once despite their frequent struggles. As soon as they hit Panama City, they went in a downward spiral. They got lost twice, and by they time they reached the Detour, it was too dark to continue. Despite that, they made it to the mat in 10th, but they had to serve a 2 hour penalty for being unable to complete the Detour, allowing the only trailing team, Michael & Liz, to catch up and send them home.