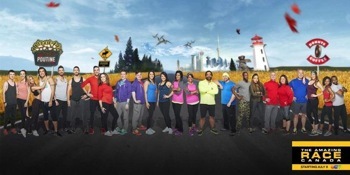 The third season of The Amazing Race Canada. This season once again increased the number of teams, this time to 12, and upped the prizes, altogether calculating at worth of over 1 million dollars, as opposed to the previous seasons, which had prizes calculated at roughly half that.

There was immediate criticism from the fanbase when the teams were announced, as 9 of the 12 teams were either from Ontario (5 of them) or from the eastern portion of the country. The teams themselves, while competitive and more evenly matched, were largely congenial to each other, meaning that there was little opportunity for the editors to highlight any meaningful or negative interactions between any teams. The result was that, unlike the prior season, there was not a single team that could be considered as an outright villain on the race. However, despite the challenges being slightly easier than the previous season, teams took penalties for not completing tasks far more than any other season on the franchise, with a total of 8 such penalties takennote two teams had two penalties apiece, while a third had three penalties, two in their final leg. The course itself proved to be very unusual, with teams visiting one province during one leg, and then revisiting the same province in a later leg. This resulted in teams constantly going through Rubber-Band A.I. as each team ended up on the same flight from one destination to anothernote Even more blatant was the first leg, as there were two flights to the initial destination but an equalizing point was present even before the next task was made available. Overall, this resulted in a rather predictable season up until and including the finale with the three strongest teams in the race where the frontrunner in terms of total leg wins would ultimately win the race. As far as how this season stacks up, while it was not as enjoyable nor matched the intensity of the second race, it was still far better than the first one. 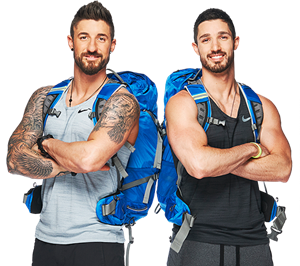 Brothers and blue-collar workers. They were very intense and cutthroat racers intent on doing anything within their power in order to win (with such tactics as poaching the cabs of other teams, and the only team to take advantage of multiple U-Turn powers in the same race). While this drive would reward them with 4 leg wins before the finale, the most of any team, they also proved to be largely inconsistent, as there were times in the race where they would end up at the back of the pack and would struggle to stay alive. They would spend the entire final leg of the race neck-to-neck with Nick & Matt up until the final Roadblock where Jesse would edge out Nick in finding his matching ski, winning them the race. 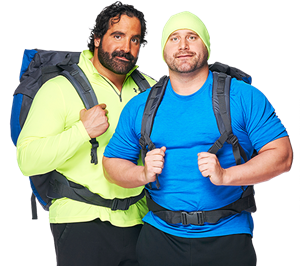 Wrestling Teammates. While the show initially portrayed them as a physically intimidating team, they were also shown to have Hidden Depths, with Nick being an elementary school teacher and Matt being a Real Estate agent for their day jobs. Not surprisingly, they proved to be very adept at mental tasks while breezing through the physical ones, allowing them to dominate the season despite only having one leg win. They would switch leads with Gino & Jesse in the final leg up to the final Roadblock where Jesse would ultimately edge out Nick for finding the matching pair of skis, leaving them in 2nd place. 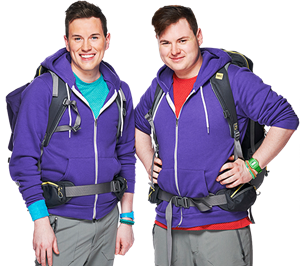 Brothers and design students. They proved to be the Plucky Comic Relief for this season of the race with Sean's Running Gag of vomiting during intense moments of stress. While they were doubtful of their abilities as first, they proved to be very consistent racers as, despite being non-eliminated in Leg 9note not due to any true fault of their own other than being unlucky Failing a Taxi, they constantly finished at the top half of the standings with two leg wins under their belt. In the finale, Brent would continuously struggle at the Cycling Roadblock falling off the narrow beam. He would eventually complete the Roadblock after 20 attempts, but this pushed them so far behind that they ended up in 3rd place. 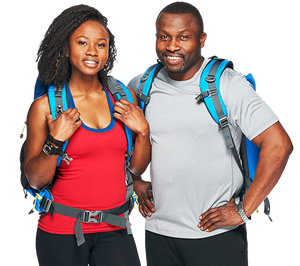 Father and daughter Nigerian immigrants. They saw the race as an opportunity to not only appreciate the world, but also the nation that they became citizens in. This allowed them to get one of the more positive edits throughout the Race despite suffering huge lapses resulting from Reality Show Genre Blindness more than any other team. Leaving the Plastic detour in Leg 11 in a tight three way race with Gino & Jesse and Nick & Matt, they were on the losing end of a cab fight with Nick & Matt. They were then beaten by Gino & Jesse at the Curling Face-off, resulting in their cab being poached a second time by Gino & Jesse. Although they would catch up to both teams at the Saloon Roadblock, Ope would be edged out by Jesse. They would ultimately finish in 4th place, but gained a new appreciation for Canada in doing so. 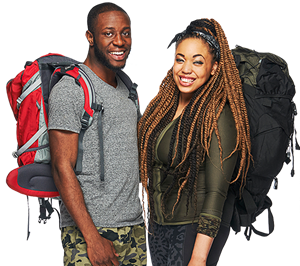 Exes and Professional Dancers. Upon their casting announcement, many fans expected them to be the "fighting couple" of the season. But with the exception of a couple of legs, they were shown spending far less time fighting and more time trying to work together on the race. This resulted in them finishing in the middle of the pack for the most part, with two leg wins under their belt. Ultimately, Killer Fatigue would do them in, starting with Leilani struggling (and getting injured) during the Waterski Roadblock in Penticton. This would push them into last place, where they would spend the rest of the leg bickering with each other. They would never recover, and with Nick & Matt U-Turning them (along with taking penalties on both sides of the detour due to said Killer Fatigue), Dujean & Leilani would be left out in 5th place. 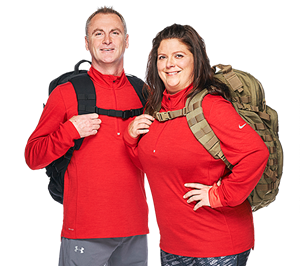 Married police officers with Cynthia also being a former paramedic note though it was apparent that they did not tell the racers their true backgrounds. Despite keeping to themselves, they were actually very intense racers who consistently raced at the top of their pack. Upon reaching Kolkata, they would find the environment very unsuitable for them as they were unable to maintain their concentration during the Flower Garland task. Later, after finishing the Roadblock, they were unable to find a taxi to take them to the detour. Finally, despite getting into a cab to the Pit Stop before Gino & Jesse, they got caught in a traffic jam that delayed them far enough that they finished in 6th place. 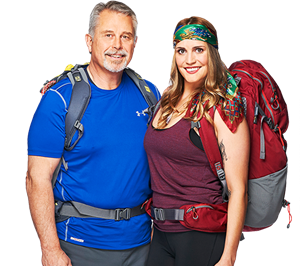 Canadian Football Hall of Famer and his daughter. Aside from a first place finish in Leg 3, they mostly finished in the latter half of the standings, never finishing higher than 6th in all other legs. Upon arrival at Saskatoon's airport, they immediately found themselves overwhelmed with the Airport Flight Plan task, prompting Neil to tell the judge that they had decided to take a penalty after seeing Dujean & Leilani do the same. But while Dujean was able to breeze through the Trampoline Roadblock, Neil ended up struggling to complete the task. While they initially checked in the leg's Pit Stop in 4th, the other 3 trailing teams managed to check in (including Simi & Ope, who had struggled during the entire leg), resulting in their elimination in 7th. 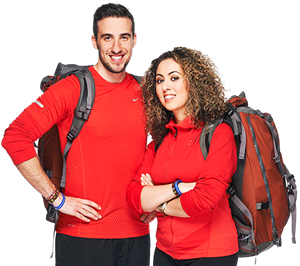 Dating couple, with Sabrina 10 years older than Nic. From the very first task, they were portrayed as a very mistake-prone team as they would constantly blunder or struggle through many of the tasks of the race. Even though they finished in the top half of the standings in the first two legs, the next three saw them scraping the bottom of the rankings. They were ultimately done in by struggling through both the Detour and the Roadblock during the sixth leg and finished in 8th place. 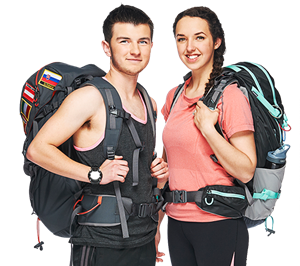 Engaged couple, Hamilton is the show's first transgender contestant. They hovered around the middle of the pack, and even won the 2nd leg after winning the express passes and using their own in the subsequent detour. However, things started to unravel for them in Halifax as Hamilton would realize that he had misplaced his passport on the plane from Toronto to Halifax. Things got a lot worse when they not only switched from the Bubbles to the Suds detour, but they also failed to read the part about the Suds detour that required them to pick up beer kegs at each location. Although they finished the detour quickly enough, they had to go back to the airport to retrieve Hamilton's located passport. Unfortunately, the time taken was long enough that despite Sabrina and Nic having an equally worse leg, they were unable to make up the time lost and finished in 9th. 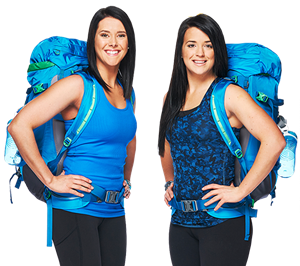 Police Officers with the Royal Newfoundland Constabulary (RNC). After a pair of 7th place finishes, the 3rd leg saw them struggle with the Blind Soccer task much more than anyone else, despite being one of the first teams to arrive at the task. Despite finishing the task just ahead of Brent & Sean, Simi & Ope having to switch detours twice, and Nic & Sabrina being hit with a 2 hour penalty, they were passed up by the first 2 teams at the Dine detour, with Nic & Sabrina finally completing their penalty. They ultimately finished just behind Brian & Cynthia, eliminating them in 10th place. 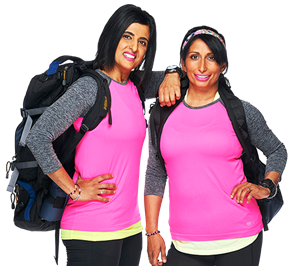 Corrections officers. Due to a combination of bad cabs and struggling with the Murals task in Santiago, they fell far behind that despite Gino and Jesse switching detours, they were unable to catch up and finished 11th. 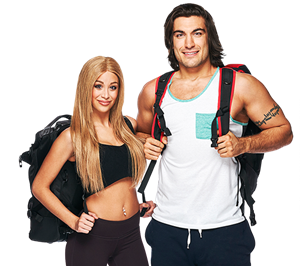 Professional UFC fighter and his girlfriend. At the Sports Broadcasting Roadblock, Elias's dyslexia caused him to have difficulty pronouncing the words throughout the challenge. This put them so far behind that despite a good performance by Max at the Atlantis Obstacle Roadblock, they were ultimately eliminated in 12th.