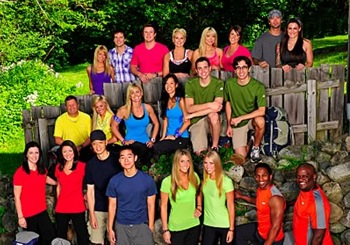 The seventeenth season of the Race, The One Where a female team finally won. On the heels of two disappointing seasons and their first Emmy loss, the Race needed to do something to shake up the show, so they reverted to what worked so well in Seasons 12-14, more savvy teams and more tricky mental tasks, and they ended up with one of the toughest and most memorable fields the Race had ever seen. This season contained the most unsubtle Foreshadowing the show had ever used, as, by the time the finale rolled around, most long time fans realized that a female team was finally going to win the Race. A good season, it erased many of the bad feelings left over from the two previous seasons, and left the fanbase excited heading into Unfinished Business.

Of special note, while Season 7 had the highest ratings of any season, Season 17 is the highest ranked season, being the 22nd most popular show of the 2010-2011 television season (Seasons 7 and 12 both came in at #25). 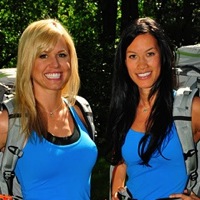 Anesthesiologists and the first female team to win the Racenote Though they were the third female winners in the overall franchise, Nat & Kat stood out early due to getting on the second flight out of Boston, yet making up the half hour deficit to be the first team to reach Stonehenge. They would become fan favorites due to their polite natures, and they are possibly the only team to go through the entire season without getting mad at each other, or anyone else. Though they won five legs, going through stretches where they would easily dominate the other teams on tasks, they would at times stumble to the back of the pack and have to claw their way back up the standings. In the finale, they found a cab driver who allowed them to use his phone to figure out the big puzzle clue, giving them a huge lead over the other teams and winning them the race. 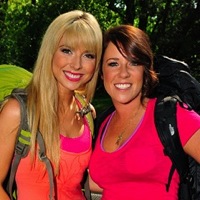 Claire: We might come off as the ditzy la la girls, like, "Aw, they're cute, but they're high maintenance, they're not gonna go anywhere," but the ditzy la la's, I think, are here to stay.
Brook: We're not goin' anywhere, anytime soon.

being used to promote the season, and gaining millions of hits on YouTube in the process. They were immediately dismissed as fodder due to the watermelon clip and their diminutive statures, but after quickly recovering from the watermelon incident, and then winning the second leg, they would establish themselves as one of the favorites to win. They wound up 2nd when they just couldn't keep up with Nat & Kat in the finale, stopping to look up the answers for the cryptic puzzle clue while Nat used her cab driver's cell phone to call information and get the answers. They were invited back for Unfinished Business, but had to decline due to Claire getting pregnant. 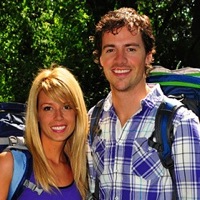 Thomas: We're gonna keep that streak of no all-female teams winning. I could care less about any type of history.

Dating couple, and the first team to win the Express Pass. They were the biggest threat to an all-female team winning, with Thomas showing a surprising level of respect for his female competition, while simultaneously showing little respect for his girlfriend's own skills. They ended up 3rd in the finale when they jumped in a cab whose driver didn't understand that they wanted to do an internet search for information, and got them dreadfully lost. 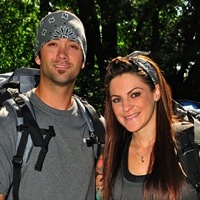 Vicki: We're more of a physical couple than mental.

The heavily tattooed dating couple that bumbled their way through most of the race, with Vicki doing her best to stay positive while Nick constantly berated and quit on her. Despite being so clueless that even Phil couldn't help but make a sarcastic quip at their expense, they managed to make the top 4, where they would cause the producers a huge headache after they took a 6-hour penalty for quitting the Detour, yet were non-eliminated. Fans were ready to riot had they made the Final 3 after Nick had essentially quit the race, but they missed the equalizing flight on the next leg, and finished a distant 4th. 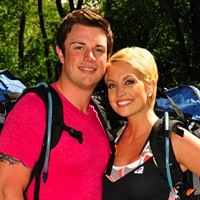 Couple who had been dating for only eight months prior to the Race, and it showed. Though they did not struggle as much as Nick & Vicki, they were just as easily outclassed by the top three teams. Their one shining moment came in leg 8 when Chad proposed, and they went on to win the leg. They would get U-Turned by Nat & Kat in the next leg, and, already trailing behind due to a bad rickshaw driver, they would finish 5th. 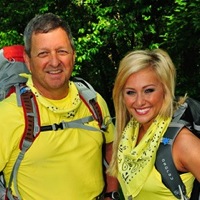 Miss Kentucky and her father, they immediately stuck out because of their blindingly positive attitudes and high energy. Despite this, they found themselves often overshadowed by Brook & Claire. In Oman, they got lost for eight hours due to a horrible map that did not include many of the roads they needed, and ended up 6th. They were one of the more surprising selections for Unfinished Business, where they ended up being one of the stars of the season. 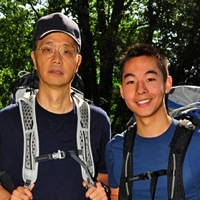 Father and son team, and stars of the Kev Jumba YouTube videos. Their inclusion initially caused a lot of excitement amongst their fans, but Kevin was not popular with the Race fanbase, mostly because all they ever saw was him constantly putting down his father's ability to do tasks, and ignoring his advice. In Russia, they would earn two 30-minute penalties (one for hiring a cab to lead them to their destination when it wasn't allowed, and then again for taking a cab when they were told to walk). They still might have been able to survive the leg, thanks to Chad & Stephanie having their own 30-minute penalty for taking a cab, but Michael struggled with the Gorodki Roadblock, dropping them from 2nd to the bottom of the pack, and putting them out in 7th. 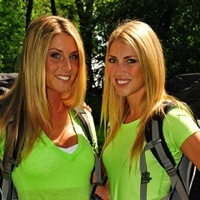 Beach Volleyball partners. They would be eliminated on leg 5 when, after falling behind on the sledding Detour in the previous leg, the lack of an equalizer left them scrambling to catch up to the other teams, only one of whom was under an hour ahead of them. Though their time on the Race was short lived and spent mostly in the background, they would become much more prominent once they reached the Elimination Station, where they constantly complained and talked about how they didn't want another all-female team to win the race. 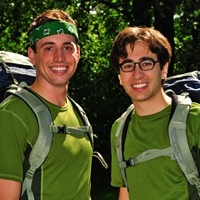 Amazing Race, how sweet the game
That has two friends like we
We once were Princeton guys
But now, we want that prize
Were kind, but now we're mean
...
Through many Detours, Roadblocks, and legs
We are the last team to arrive
And Phil will send us home
Goodbye

Ivy League A Cappella singers who had a tendency to constantly break out into song. They started off strong, even winning the third leg, but Jonathan struggled with the sledding Detour in Sweden, and Detour switching put them in last place, eliminating them on their graduation day from Princeton. 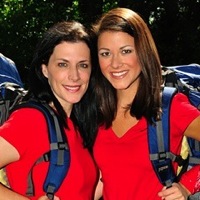 Mother and the daughter she gave up for adoption when she was 22. They only met twice before running the Race together, and never heard each others voices before applying for the Race. We never got to see how this lack of interpersonal experience affected their teamwork, as their cab driver had trouble finding Peace Motor Spare Parts in Ghana, and they finished 10th. Once they hit the Elimination Station, they became the one team during the run of the web series to have actually preferred being eliminated, rather than wanting to still be in the Race, with Andie saying multiple times that they were having more fun there than they could have had on the Race. 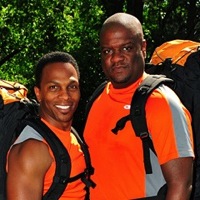 Best Friends and theater aficionados. They started off strong, being the first team to reach Logan airport in Boston. However, they would quickly get lost in England, and then have issues rowing their coracle, resulting in them being eliminated first.