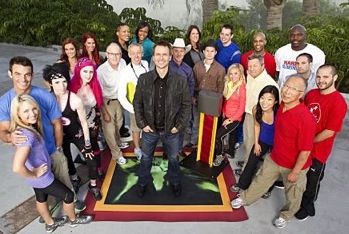 The idea of a "second chance" season had been one that consistently floated around the fanbase since the early years of The Amazing Race (with some fans even preferring a "No-Stars" season to "All-Stars"), since even early out teams managed to garner plenty of fans, and many teams with potential fell by the wayside after only one bad leg. The producers of the Race thus responded with Unfinished Business, a season featuring returning contestants from Seasons 12-17 that had never won beforenote Though in the original All-Stars, the only former winners cast were Uchenna & Joyce. Though there were complaints, ranging from the lack of Season 13 representation, to the over-representation of Season 14, to skepticism of the premise that pitted early outs against Final 3 finishers, the teams, save for Amanda & Kris, were the names people generally expected to see back regardless of what they thought of them personally (with the only really big snubs being Brook & Claire, who got invited back but were unable to compete because Claire was pregnant, and Toni & Dallas).note Which meant that, despite it being the only season to feature returning teams not to be called "All-Stars," it had the cast that most resembled what most fans would consider an "All-Star" cast.

The results were surprising, with the mostly even skill-sets of the teams causing them to consistently be bunched together and shoot up and down the standings from leg to leg. The former Final 3 finishers faltered, coming in at 6th through 9th places and only winning 2 legs between them, while the teams who won the most legs originally finished 6th and 9th (combining for zero wins in their previous seasons), with the eventual winners being a team who few would have bet on even while the season was running. Though the season had its flaws, most glaringly the domination of answer-sharing alliances that rendered many of the puzzle tasks almost moot, the experiment was generally considered a success, as the positives (such as the increased level of difficulty that was missing from All-Stars, and one of the best finales in the series) far outnumbered the negatives. It left fans anticipating a similar season in the future.

Because of the nature of the season, all teams are examples of My Greatest Failure (which is listed in their character bios) and My Greatest Second Chance. 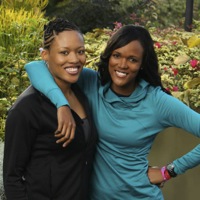 Kisha: This time around, no bathroom breaks.
Jen: I will pee my pants to make the Final 3.

Previously eliminated for (among other things) Jen's infamous Potty Emergency, the athletic sisters were back, this time with Jen prepared to pee in her pants if necessary. They returned as a more efficient and prepared team, having worked out their Sibling Rivalry and Jen's fear of water, the problems that held them back previously. Despite being one of five Season 14 teams cast, they were the only ones to make it to the second half of the season, surpassing Margie & Luke and Jaime & Cara, two teams who had outperformed them during their last race. They stayed under the radar for most of the season, always running near the top but never winning a leg until they rushed to claim the big prize in the final leg. Fittingly, as the finale aired on Mother's Day, they planned to use the money to help their single mother start a business. 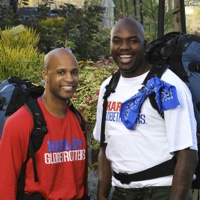 Originally eliminated after Big Easy was unable to unscramble the word "Franz," they returned to trot the globe again. Already notorious information leeches during Season 15, they took it Up to Eleven this time, as they, out off all the teams, benefited the most from the alliance-dominated season. They used their charisma to get answers from other teams (mostly Zev & Justin), and stay with the pack, despite rarely completing a mental task on their own. They reached the Final 3, creating much apprehension among some fans who were worried that, despite their two leg wins, they were about to see another All-Star season end with a controversial winner. They took a brief lead in the final leg following the first Roadblock, but Kisha & Jen passed them by when their cab went to get more gas, and they were unable to catch up during any of the remaining tasks. So, much like the Washington Generals, they finished 2nd, but would get another shot at the million on the second All-Stars. 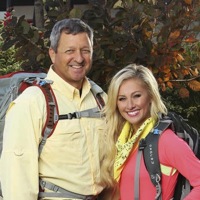 Originally eliminated for getting lost for 8 hours in Oman, the Kentucky father/daughter duo returned to spread sunshine once again. They came into the season as one of the more questionable casting choices, as they had previously been overshadowed, both character-wise and gameplay-wise, by the duos of Brook & Claire and Nat & Kat. However, without the massive presence of Brook to overshadow her, Mallory was able to shine, and they quickly became fan favorites. Gary continued to rock the Race, as they won three legs on their way to the Final 3. After Zev & Justin were gone, they were the favorites to win until a bad cab driver completely put them out of contention in the final leg, and they finished 3rd. Mallory would return as Mark Jackson's replacement partner on the second All-Stars. 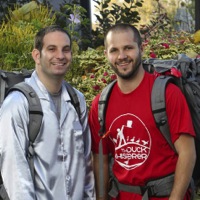 Previously disqualified due to Zev's lost passport, the wisecracking duo came back, this time remembering to keep their passports with them at all times. Despite coming in with the lowest previous finish of any returning team, they won the most legs: 4 of them, including one in which they beat a flight delay that put them an hour behind the other teams. However, they were a very "all or nothing" team. Save for one leg in India, they were either leading the pack or scraping along at the back, barely avoiding elimination. They were also the worst perpetrators of the answer-sharing that plagued the season, as they unabashedly gave Flight Time & Big Easy answers to tasks and other info, all but dragging the Globetrotters into the top 4. Their luck finally ran out in Brazil, where the entire penultimate leg served as a Humiliation Conga for them, and they settled for 4th place. 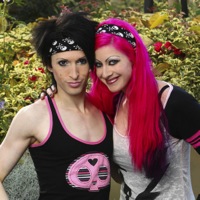 Eliminated when Kent's stick-shift issues caused them to break down, both figuratively and literally, in Italy (though the direct cause of their elimination was U-Turning a team ahead of them in the next leg, followed by Kent screwing up the Roadblock), the best-dressed team were back in pink and black. Unfortunately, it seemed like they never recovered from the Italy incident, as most of their racing talent seemed to evaporate (they were overjoyed to come in 3rd, a far cry from their Always Second Best days), and they degenerated into just another fighting couple. Despite leaving the chocolate gnome Roadblock first, they were eliminated in 5th place when they got a thirty minute penalty for taking a cab instead of walking to the Pit Stop. 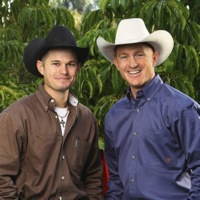 Originally "robbed" of their victory due to Dan & Jordan cutting in line at the airport (though the actual cause of their defeat was an inability to figure out one of the clues in the final leg, which never seemed to come up), the cowboys returned to settle their business. However, the tougher tasks and competition exposed their weakness at the mental aspect of the game, and they found themselves getting by solely on their ability to do the physical tasks faster than everyone else.

They were ultimately done in by a combination of their poor navigation skills and the answer-sharing alliances they were not part of. Jet got lost during the Lichtenstein measuring Roadblock, and even though Flight Time also got lost, only Jet had to re-run the task, as Flight Time was able to get the answer from Justin. This put them so far behind that they could not catch up, even with the Globetrotters making several mistakes during the Detour. A U-Turn at the end of the leg sealed their fate in 6th place, as they were the last remaining previous Final 3 team to go out. They would get another chance to rectify this on the second All-Stars. 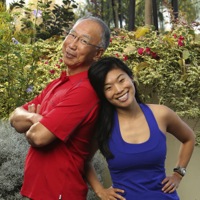 Originally defeated due to Christina's breakdown at her season's Final Roadblock, the father-daughter pair returned with the real truth flavor. The tougher course and competition highlighted how Ron's immaturity and constant nagging hindered the team, despite Christina continuing to show her adeptness at the Race. Though they were able to use their wits to stay mostly near the top of the pack, they went out in 7th after Ron went off course during the holy men Roadblock. 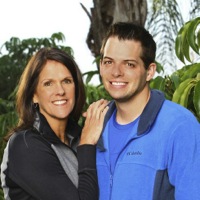 Previously losing due to Luke choking away a huge lead at his season's Final Roadblock, the Bionic Woman and Sinister Deaf Kid returned with Luke vowing to not make the same mistake twice. They started out slowly, but had seemingly found their groove with a a pair of strong legs, including a leg win, in China. However, Luke broke down at a Roadblock once again, as he was the last to identify the correct tea at the tea-tasting Roadblock, and they finished in 8th. they would be given a third chance on the second All-Stars. 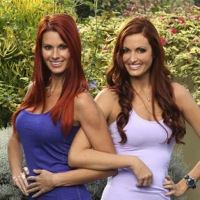 Originally unable to reach the Finish Line first due to a bad cab driver (though Jaime struggling to find the last surfboard at the Final Roadblock didn't help), the cheerleaders were back in red, this time with Jaime now a Playboy Playmate. They consistently lagged near the back of the pack, with Cara pointing out how they had never performed that badly during Season 14. They were eliminated in 9th place when Jaime struggled to complete the dinosaur assembly Roadblock. 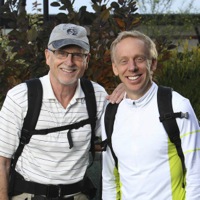 Eliminated previously due to trusting a cab driver who broke them away from the pack and took them to the wrong location, the father-son filmmaker pair returned to savor more of the world. Due to his age, Mel was ill-fit to run the more strenuous course, as Mike constantly worried for his father's health. This would come to a head in Japan, where they had to be treated for hypothermia during the Frog of Luck Detour and were sent directly to the mat for elimination in 10th. 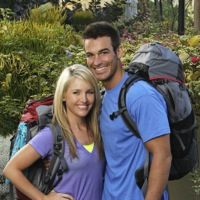 Originally victims of the Blind U-Turn, the couple returned, now engaged, to see how much further they could go. They were easily the most surprising team cast, as many fans did not even remember them. As fate would have it, they were the last team to figure out the QANTAS puzzle at the Starting Line Task, and were thus automatically U-Turned again. This would prove to be their undoing, and they became the first out in place of one of the more popular teams.