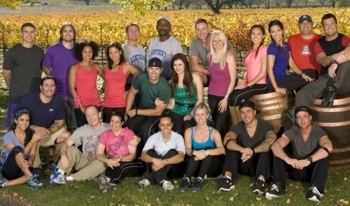 The producers started off Season 20 by moving the Race in a new direction. Whereas Season 19's course had been created to exploit the Metagame, giving the contestants one of the trickiest mental challenges in the show's history, Season 20 hit the teams with the most physically challenging course since Season 10, and the cast was stocked with big, strong teams able to take advantage of this new, physical bent. However, whereas Season 10 mostly hit the teams with a series of challenges that relied on brute strength, Season 20 hit the teams with a wide variety of physical challenges, ranging from constructing a campsite, to balancing bottles on their heads, to dance choreography, designed not to give Alpha Male teams a distinct advantage.

The course was a success, and for the first six legs it seemed like the season might be as well. However, the later legs turned ugly and bitter, and somewhat predictable. The season had some of the most notoriously bad inter-team relationships, with all those bad feelings coming to a head during the seventh leg, when three of the teams started an argument during a layover at the Nairobi airport, which ended up spilling over and engulfing all the remaining teams in some way. The competition turned ugly after that, and when the only two remaining likable teams fell in 6th and 5th place, it ended up challenging Season 10 for having the series' most hated Final 3. On top of that, the teams outside of Dave & Rachel and Art & J.J. were comparatively weak, leading to those two teams winning 11 of the 12 legsnote Making it one of two seasons, alongside Season 13, in which only three teams managed to win legs., and finishing outside of the top 3 only three times combined. This led to a rather predictable, and somewhat boring, second half of the season, and a finale that even one of the biggest mistakes in series history could not entirely salvage. In the end, what started out as a solid season ended up on the weak side. 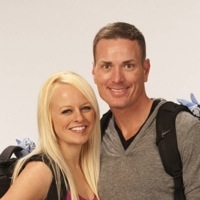 Army combat pilot and his wife, they had spent a lot of time apart due to Dave being deployed in Iraq for a year. They used their physical abilities to dominate the season, winning a record eight legs, and becoming only the third team to crack a finishing average better than 2.00note Eric & Jeremy and Meghan & Cheyne being the first two, though Marc & Rovilson also did it in Asia 2.. All was not sunshine with the couple though, as their time apart and Dave's army training caused him to be rather stern with his wife. He yelled at Rachel a lot, treating her like a soldier instead of a spouse, which she did not just take, responding to his verbal abuse with a boatload of snark. They led for most of the final leg, but almost blew it when they followed the wrong path at the Coral Kingdom Gate, and ended up running to the Finish Line instead of the second Roadblock. Phil turned them away, but they were able to make up the time lost when Art struggled with the sledding portion of the Roadblock, as Rachel passed him, and they officially checked in for the win. 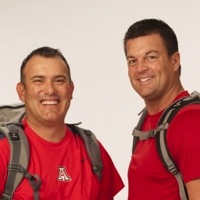 Art: I think somebody's going to end up crying by the end of the day.
J.J.: Just don't let it be you, Art.

Border Patrol Agents, they were very intense racers, which translated them to being unbearable Jerkasses to most of the other teams, even somehow turning Mark & Bopper, a team they gave $5,000 of their own leg prize money to, against them. While Art at least had a sense of humor, J.J. seemed to take offense anytime someone didn't race with the same level of intensity and savviness that he did. They managed to win three of four legs not won by Rachel & Dave, and looked like the only team with a chance of unseating them in the finale. A mistake early on while trying to find "Mauka and Makai" dropped them to last. However, they would manage to recover and take the lead heading into the final Roadblock thanks to the mistakes made by the other two teams, but Art would struggle with the sledding Roadblock, getting passed by both Rachels, and they would end up 2nd. 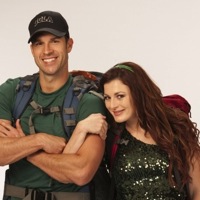 Rachel: Amazing Race is supposed to be fun and good.

Engaged couple, they met on Big Brother 12, and both returned for Big Brother 13, where Rachel won. As with most imports from other CBS Reality Shows, they were not popular with the other teams due to their Stunt Casting status and already having won that show, but certain teams had a hatred for Rachel that people did not have for previous imports, probably because she constantly whined and complained about everything. Whatever it was, Rachel was berated right up to the finale, where they would fall behind when they mistakenly jumped in a cab instead of running to a nearby baseball field to catch a helicopter, and ended up 3rd. Rachel's over the top Wangst, and their status as Big Brother favorites got them invited back for All-Stars. 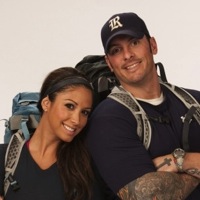 Ralph: All these people are so excited and happy to see us, I don't know why.
Vanessa: They haven't met us yet.

Dating divorces. Despite their fighting, and their constant brushes with elimination, they would probably have been a lot more popular had Vanessa not hated Rachel Reilly, and spent the entire Race insulting her both to her face and to the camera, despite Ralph repeatedly telling her to let it go. Vanessa would sprain her ankle while leaving the Roadblock in leg 10, and because Ralph had run out of Roadblocks, she was forced to do the Japanese Game Show Roadblock in the next leg. She predictably took much longer than the other teams to complete a task involving so much running, which ultimately put them behind and caused them to finish 4th. They would later split up, after which Vanessa would begin dating NBA star Tim Duncan. 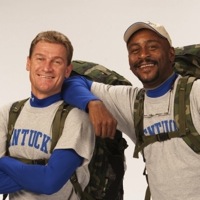 Friends from Kentucky, they quickly became favorites amongst the cast and viewers. When they weren't enjoying the hell out of themselves, they also had one of the most heartbreaking stories in the series, as Bopper's daughter was sick and he needed money to treat her. They managed to run a fairly strong race, and were the only team to beat Rachel & Dave to a Pit Stop after leg 5. Unfortunately, Bopper wrenched his knee in Tanzania, forcing an uncoordinated Mark to do the Bollywood Dancing Roadblock while suffering through dehydration and the after effects of motion sickness, and they didn't leave the Roadblock until all the other teams had completed the leg. Despite being non-eliminated for the second time during the season, the dancing Roadblock put them so far behind that not even the Fast Forward was able to save them in the next leg, and they finished 5th. Their fan favorite status got them invited back for All-Stars, where Bopper would have to pull out due to pancreatitis, and Mark would end up running the race with Mallory Ervin. 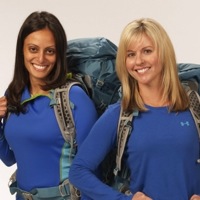 Federal agents masquerading as school teachers. They stayed pretty much in the background through the first half of the season, until a conversation with Art & J.J. in Baku clued the Border Patrol Agents onto their real identities. Deciding they wanted to stir the pot, Art & J.J. told the other teams that Nary & Jamie weren't really teachers, something the other teams did not care about, and, immediately following the big fight at the Nairobi airport, they decided to make the whole situation worse by confronting the Federal Agents about their real jobs. Though not phased by this mess in the least, Nary & Jamie still ended up last at the end of that leg when they had trouble setting up their campsite. Though they would get saved by a non-elimination, they would start the next leg more than two hours behind the second-to-last team, and, as there was no equalizer during the leg, they were not able to catch up despite Vanessa & Ralph blowing their lead, and they were eliminated in 6th. 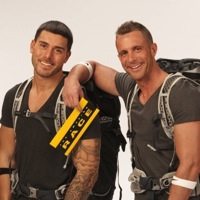 Friends and "Guidos," they they were an obvious play on the then current popularity of Jersey Shore, with the editors taking them as about as seriously as seriously as the rest of America took the cast of Jersey Shore. They started off weak, only avoiding elimination in the first leg due to Misa & Maiya's Pit Stop blunder, but were able to recover and pull of a number of top 3 finishes. Their momentum died in leg 6, however, when they went for the Fast Forward in Azerbaijan, and ended up losing a hay bale stacking race to Rachel & Dave. This put them so far behind they never saw another team after that, and they finished 7th. 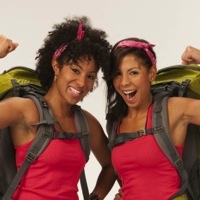 Cousins from Mississippi, only the second set of cousins in the series after Charla & Mirna. On a season notorious for having the worst inter-team feuding in the series, they were easily the most hated by the other teams. However, as all of their clashing with the other teams, and all of the complaints the other teams had about them, were all relegated to Deleted Scenes, they ended up not really doing much during the actual episodes. Despite leaving the Roadblock in Germany in 7th, they got lost looking for the Pit Stop, allowing Nary & Jamie to pass them, and ended up finishing 8th. 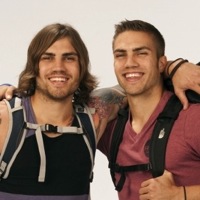 Twin brothers, a musician and a soccer player. After an uninspiring first two legs, they ended up on the second flight to Paraguay, and subsequently struggled with the harp stringing, finishing it long after the other teams. However, they showed up at the bottle dancing Roadblock to discover they still had a chance, as Ralph & Vanessa had struggled just as much with watermelon stacking. Ralph beat Elliot by minutes at the Roadblock, and they were eliminated in 9th. 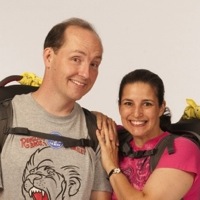 Married clowns. They went in at a huge disadvantage, being relatively out of shape on a physically tough course against all the physical teams. However, they got eliminated not due to their physical abilities, but because Dave struggled with math in the cow counting Roadblock, putting them in 10th. 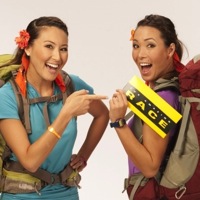 Sisters and golfers, they made one of the biggest boneheaded mistakes in Race history in the premiere. Next-to-last at the end of the episode thanks to Maiya getting her SUV stuck in sand during the Roadblock, they hoofed it to the Pit Stop, charging through an entryway into an open courtyard. Phil, the greeter, the Pit Stop mat, and Phil's camera and sound crew were all there in plain sight, approximately 80 yards to their right. Misa & Maiya did not turn their heads and therefore failed to see them. They left the building in confusion, and, while they were wandering outside, Joey "Fitness" & Danny checked in, and Misa & Maiya were eliminated in 11th.