What the hell are we going to Phoenix, Arizona for? I wanna go to New Zealand!
Marion Paolo (summing up the general feeling about the season)

Season 8 was initially planned to be an All-Star season, the same numbered season as Survivor. However, after seeing how Survivor: All-Stars ended up becoming bitter and personal, and wanting to avoid something like that happening on what was essentially a family show, the idea was scrapped and a radical idea was put in its place. Season 8 was billed as a Family Edition, where families of four could compete, and it would be the only season where children under the age of 18 could participate.

Unfortunately, for mostly insurance based reasonsnote  The show usually can’t insure anyone between ages 18-20 to go outside North America. Technically only one partner has to be over 21 but they really prefer for both of them to be. Only three people under 21 have ever competed on the show in all 31 of the normal seasons. They couldn’t get the kids insured so they stuck to North America , teams were confined to the North American continent proper, which meant that the vast majority of the race was spent exploring the United States. Couple that with an accumulation of other issues such as an extra family being cut at the last minute, having to fit 40 contestants into the same amount of airtime normally meant for 22, an extremely large amount of non-elimination legsnote With only seven eliminations spread over thirteen legs, there were three non-elimination points and two double legs, the difficulty of most of the tasks being reduced dramatically (the leg 4 Roadblock involved one team member climbing a ladder to the top of the world's tallest office chair), and the emphasis being pulled off of the international travel aspect and onto a bunch of family members arguing in the back of an SUV, and you are left with a season many people consider to be the worst.

Nevertheless, the cast was (for the most part) diverse and memorable, the season was very competitive with no dominant favorite, and, if you lived outside of North America, the chances were you found something enjoyable about it. 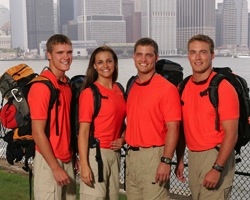 Three brothers and their sister. They spent most of the season in front of the pack due to being young and fit, and therefore were able to power their way through the severely reduced difficulty. Though technically the first sibling team and containing the two youngest competitors to win the Race (Megan at 21 and Tommy at 19), the unconventional nature of the season instead gives those designations to Nick & Starr. 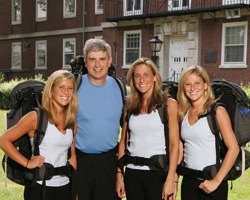 Father and his three daughters. Wally quickly took a back seat, feeling like The Load next to his younger, fitter daughters. Though they had the most first place finishes leading up to the final leg, they lost when Wally got edged out on the giant puzzle of North America that served as the Final Puzzle for the season, although they did beat the Weavers to win the Final Amazing Challenge post-race. 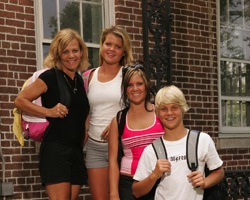 Linda: I don't get it, most people like us. I've never been in a situation where we've been unliked in my life.

A widow and her three children. Linda's husband, a safety worker, died during a Daytona NASCAR race

when he was struck by a car while picking up debris. Though seen as sympathetic at first, their random bouts of insanity and Holier Than Thou attitudes quickly turned the other teams and the audience against them, and made them the villains of the season. Despite all the other teams gunning for them, they managed to make their way into the Final 3, where they fell behind while driving to Niagara Falls, finishing over an hour behind the other two teams. 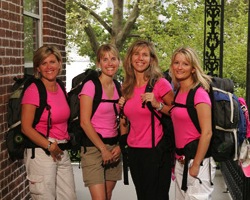 Team of four sisters. They were the first all-female team to win multiple legs and back-to-back legs, two seasons before Dustin & Kandice did both. They also made up an hour deficit to win the first leg, and had the best finishing average for most of the season. Unfortunately, just like with the Linz Family, no one cares about the Family Edition, so they're mostly forgotten in discussion of strongest female teams. They fell in 4th place when they couldn't stop bickering, mostly due to Christine's mood swings and inability to cooperate with her sisters, and struggled with the teepee building Detour. 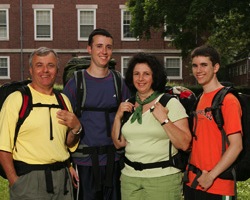 Dysfunctional Family from New York. Even though they scraped along the bottom for the first part of the season, spending most of their time in last, the fighting between D.J. and Marion became one of the few entertaining parts of the season. They seemed to pull it together when they finally left the country, winning the legs in Panama (via Fast Forward) and Costa Rica, but everything fell apart again when they got back to the U.S. They were eliminated in 5th when they took the longer route to the Grand Canyon. 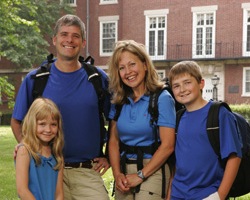 Parents and their two children. As one of two teams with a child under 10, they naturally went in with distinct disadvantage to the other teams. They also became obscenely popular with a small section of the fanbase. They were eliminated in 6th when Tammy struggled on the colored bean Roadblock in Costa Rica. Billy and Carissa would write intros for the My Ox is Broken anthology. 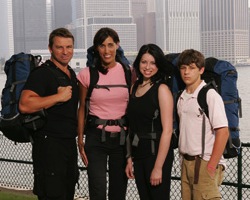 Two children, their dad, and stepmother. They started off strong, but got lost in the fourth leg looking for a park five minutes from Mark's place of work, and half an hour away from their house, which ended up making them the only team to be eliminated in their hometown, New Orleans. Months later, their home was destroyed during Hurricane Katrina. 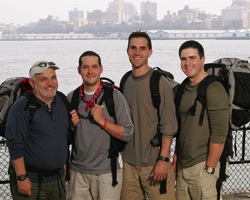 Dad and his three son-in-laws, and the only team with no blood relations. The finished 8th when they ended up on the second charter bus in leg 3 after repeatedly getting bogged at the Detour, then were the last team to make it to the "first come, first serve" Roadblock in the Space and Rocket Center in Huntsville, and didn't have enough time to make up the deficit. 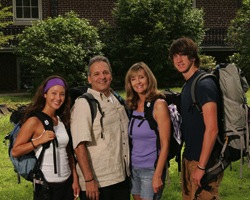 Parents and their two kids, they got lost repeatedly in the second leg and wound up in 9th place. 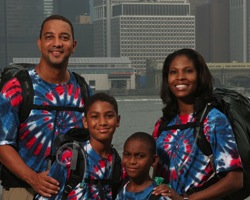 Parents and their two young sons, with Austin being the youngest person to ever compete in any edition of the Amazing Race. They were remembered mostly for the Unfortunate Implications of their last name. They were the first team eliminated when they had issues with the watermill building Detour, then were edged out by the Linz Family when looking for the Pit Stop.