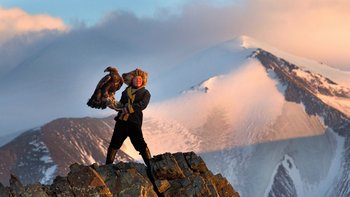 The Eagle Huntress is a 2016 documentary film directed by Otto Bell.

It is the story of Aisholpan, a Kazakh

girl living in the Altai Mountains of western Mongolia. Eagle hunting is a prized skill amongst the Kazakh people, and Aisholpan, a 13-year-old girl, dreams of becoming an eagle huntress herself. Her father Rys, a veteran eagle hunter, is eager to train her, but the elder males in Aisholpan's tribe are skeptical that a girl can be an eagle hunter. Aishoplan is determined, however, and studies the art of eagle hunting with her father. She has the chance to prove herself, first at an eagle-hunting competition, and then on a winter fox hunt with her father.

Narrated by Daisy Ridley, who received an executive producer credit.