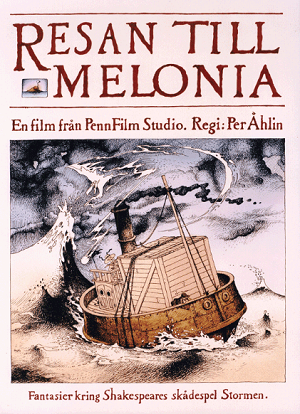 Resan till Melonia (The Journey to Melonia) is a Swedish/Norwegian animated film which is very loosely based on William Shakespeare's The Tempest. It was the first fully animated film Per Åhlin directed and one of the most expensive Swedish animated films.

On the pristine and beautiful paradise island called Melonia, a wizard, Prospero, lives with his daughter Miranda, his garderner Caliban (who happens to have the appearance of a vegetable garden himself), the bird-like spirit Ariel and the artsy, theatre loving poet William. They live a peaceful life, thanks to Prosperos magic and Melonias lifeforce, which powers the magic. Among the magical inventions of Prospero is a magical elixir, which has the potential to make anything grow large in size, which is given to Caliban for using in the garden.

At the beginning of the film, this peace is disturbed when the greedy Slug and Slag from the nightmarish factory island Plutonia is about to arrive on Melonia for colonization and resource exploiting. With them they have not only Captain Tree-stand (Kapten Julgransfot), a female cook and a helmsman - They also have a refugee from Plutonia, Ferdinand, who had just escaped a life as a child slave on Plutonia factory.

Ariel uses his magic to send the ship to the bottom of the ocean. Luckily, the ships crew and Ferdinand survives, but so do Slug and Slag. The villains proceed to kidnap Caliban with his elixir while Ferdinand, Miranda and the rest of the cast decides to journey to Plutonia in order to free the rest of the children from Plutonia.